Shannon and her kids have ridden the waves of the pandemic like many families have. Manny, who’s 15, has matured a lot and taken on more responsibility. Ten-year-old Gabriel, who loves Legos and has an amazingly extensive vocabulary, goes up and down with remote learning. When 21-year-old Lala moved out, each boy got his own room, and Gabriel tolerates Lala’s pink walls until they can repaint them. The kids’ grandparents help out safely when they can – like when Shannon herself became sick with COVID in December of 2020. 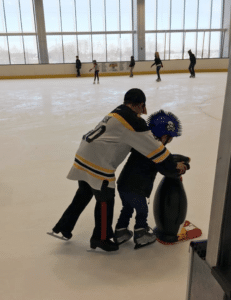 The way that Shannon and the three siblings became a family is an extraordinary story of friendship and maternal love. Shannon’s friend Angelica, “Ma,” gave birth to the kids. When 18-year-old Angelica had Lala, she was couch-surfing and asked Shannon to help care for the baby. Her insecure housing and bipolar disorder made it hard for Angelica to parent alone.

“At first, I took Lala on weekends, then it became a week with me, a week with Angelica,” said Shannon. “Lala had her own room and clothes at my house and started calling my parents her grandparents.”

When Angelica became pregnant again, she hesitantly asked Shannon what would become of this new child, a little boy named Manny. “He’s my family, too,” Shannon told her. Shannon made a lifelong commitment to be a parent to Lala, Manny, and ultimately Gabriel. The boys called Shannon “Mummy Shannon,” then simply “Mummy.”

The kids primarily live with Shannon and visit Angelica, but the two women jointly make decisions about their health and schooling. They had been able to settle differences themselves until 2013 when they disagreed about the children’s asthma medication. Shannon and Angelica used a mediator to work that out, which lead to a co-parenting agreement drawn up by Shannon’s attorney. A judge formalized the agreement and declared Shannon a de facto parent in 2014. The two used a mediator again in 2019 to settle additional medical and school issues.

“It was important to me and for the kids that Angelica keep her parental rights,” says Shannon. “She loves them, and they love her without reservation.”

Shannon is a parent and acts as a parent. Still, her de facto parent status leaves her and the kids emotionally and financially vulnerable because, in Massachusetts, de facto parents are not full legal parents. She’s not able to claim the children as dependents on her federal or state taxes. She has to file as “single” rather than “head of household.” Additionally, the kids would not have access to her Social Security benefits should anything happen to her. “I’ve paid into the Social Security system since I was 14, and I’m the primary provider for my children. They shouldn’t be penalized because of how we became a family.”

The recognition of non-traditional families is essential to Shannon and her kids as they get older and become more aware. They have to explain their family to other people, and occasionally Shannon needs to break out the documents to show doubtful educators or health care providers.

Shannon and her kids need her de facto parent status to be an equal legal status. The Massachusetts Parentage Act would not only validate Shannon’s family but help protect the kids from potential legal and financial harm. “That’s what we’re fighting for,” says Shannon.