As soon as their baby was born, Sylvia and Jane made plans to connect with other LGBTQ families so that R would see her family reflected in other families and feel comfortable and proud. It’s typical of the forethought and care that the couple puts into everything about their lives – especially in matters concerning their family. 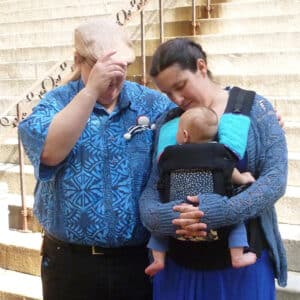 The two met in 2005 “through music and singing,” says Sylvia. Both were members of the Boston Women’s Rainbow Chorus – in fact, Jane was a founding member. They had a ton in common – both were educators, Sylvia in science and Jane in math – and they were (and still are) avid naturalists and birders. Sylvia knew she wanted to have a child. Though Jane had always pictured herself as “the cool aunt,” she was soon on board with embracing the uncool parts of becoming a parent.

The couple married in 2008. Sylvia was knowledgeable enough about marriage equality and the law to burst into tears (at work) upon hearing that the Supreme Court had ruled favorably in Windsor v. United States (2013) and Obergefell v. Hodges (2015).

Using assisted reproductive technology (ART), Sylvia became pregnant. The couple enjoyed a smooth pregnancy and birth. “It was very straightforward. We had a baby in the most normative way,” laughs Sylvia. “We were already married and had the house and might as well have had a white picket fence.”

Because they live in Massachusetts and are married, Jane was able to put her name on R’s birth certificate in the hospital even though she had no genetic connection to her child. But the couple was strongly advised that Jane should go ahead and pursue adoption to secure their parentage through an adoption decree. “We were thinking about the unknowns and what might happen ten years down the road,” says Sylvia. “We imagined R becoming ill on a school trip in an unfriendly state and Jane not being able to see her in the hospital or make medical decisions about her.”

They handled the adoption themselves, and they keep the adoption papers where they know they can grab them – in the freezer. “We had the easiest adoption possible,” says Sylvia, describing the friendly judge who played with puppets. “But it’s not that easy for everyone. You have to take a day off work to go to court, most people have to pay a lawyer, and it’s just not right for anyone to have to adopt their own child.” Even though Jane and Sylvia decided to make adoption day a celebratory one, the “congratulations” messages didn’t feel quite right.

Today R is a massively curious 5-year-old who will start kindergarten in the fall. She’s into space, watched all of the Perseverance landing on TV, and would like to go to Mars herself someday. She is very interested in how things are made, and her parents wouldn’t be surprised if she ultimately becomes an engineer.

R’s moms know that even their “easy” path to making a family involved unnecessary hurdles that the Massachusetts Parentage Act would eliminate. “I don’t want other families to have to go through that,” says Sylvia.