Simone is a determined advocate for her beloved five-year-old son, Daniel. He was born prematurely out of state to Simone and her then-partner Cara. The couple married shortly after Cara gave birth, then the family moved back to Massachusetts, Simone’s home state. 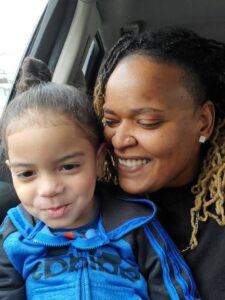 A child’s legal attachment to their parents is never more critical than when their family is in crisis. Simone found out in the most heartbreaking way when Daniel was abruptly removed from their home and placed in foster care at age two because of unfounded claims of domestic violence between his parents.

She wouldn’t see her son again for two months. That was the beginning of Simone’s legal journey – one in which she sometimes wasn’t allowed in the courtroom where her family’s fate was being decided because the system thought she was a legal stranger to her child. She saw Daniel for weekly supervised visits only an hour long. Then, when COVID-19 hit, the visits took place only on Zoom.

When a judge finally recognized Simone as an equal legal parent and Daniel was reunified with both parents, it was a profound relief to have him safely home, particularly during the pandemic, which only increased the anxiety and worry of their separation. Daniel had developed and grown so much in 18 months that “I’m learning him all over again,” says Simone.

Simone and Cara have decided to divorce, but “We are cordial, getting along well, and co-parenting well,” says Simone. “We all have meals together and had our holidays together. It’s been stabilizing for Daniel.”

The 18 months of separation were long, painful, and unnecessary. Under Massachusetts law, Simone should have been recognized as a parent under the “holding out” provision in Massachusetts law clarified by the legal case Partanen v. Gallagher. But that statute remains gendered, which makes it unclear for parents, courts, and practitioners. It is critical to update the parentage statutes so that they are explicitly inclusive of all families, regardless of gender, marital status, or the circumstances of the child’s birth through assisted reproduction.

The Massachusetts Parentage Act would provide that much-needed clarity and would ensure that in situations such as Simone’s, the parentage bond is clear and recognized at the outset. It could save many other families – especially children – similar heartache.