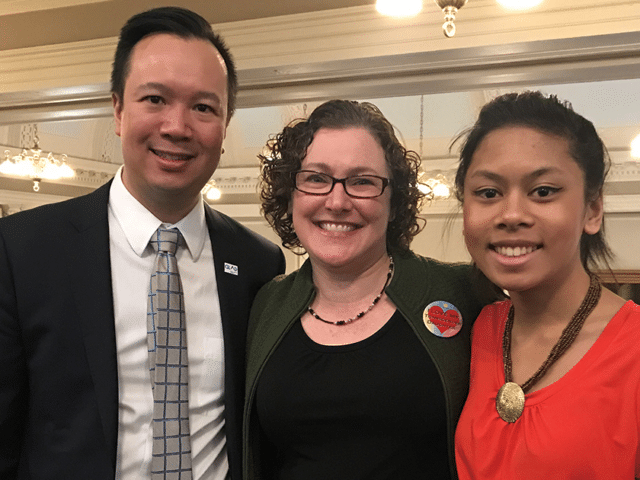 We will be back, and we will win.

Walking out of the New Hampshire State House last night, I was approached by an older man, wearing a green sweater and holding a red, white and blue sign that read: “Free and Fair Elections”. I had seen him earlier, and my best guess was that he was a probably a fixture in the state house, an eccentric personality who came to the State House to engage tenaciously at length with anyone willing to talk politics.

I was rushing to pick up pizza to feed our hardworking Freedom NH coalition team, which includes strong local partners like Transgender-NH and the NH Civil Liberties Union, Rights and Democracy-NH, and PFLAG-NH; national partners like Freedom for All Americans and HRC; and our legislative leader and prime sponsor Representative Ed Butler. We had all been working hard the last 6 months, and tirelessly for the last 48 hours, to pass a transgender nondiscrimination bill on the floor of the House.

It was 6 pm, and we had just lost our final chance to have our bill taken off the table, so that it could receive a full debate and an up-or-down vote. The anti-equality House Speaker Shawn Jasper knew that we were within striking distance of advancing the bill onto the State Senate, and the only way he could table a vote was through strong arming his caucus, and then engaging in unorthodox procedural maneuvers to end the session early, before his side lost too many votes from representatives getting a head start on their drives home.

This was a highly unusual process for a bill that won an overwhelming and bipartisan 15-2 approval in committee, after a 5-hour hearing with over 60 testifiers. It meant that our bill was effectively dead through the end of the year. I felt deeply disappointed and frustrated, and yet I knew I had to wait to process those feeling until we could assemble our team to debrief over pizza at our lobbyist’s office across the street.

And so, when the man in the green sweater stopped to talk to me, I admit I wasn’t at my most patient.

I apologized that I was in a rush as I exited the doors of the state house, but he kept walking with me into the cold.

“What does the green ribbon mean?”

I stopped, not wanting to be ruder than I already was. “It means support for the transgender nondiscrimination bill, which we just lost on the floor a few minutes ago.”

“Oh, I see.” He replied. “Well, I wouldn’t worry about that. You see, transgender people are already protected under the Equal Rights Amendment. It prohibits discrimination in the Constitution on account of sex.”

I knew that the Equal Rights Amendment (ERA) narrowly failed to be ratified despite an over 70-year fight by generations of women’s rights activists. But I didn’t have the time or the heart to engage in a discussion about how and why the ERA failed, and so I thanked him for his suggestions and continued more quickly on my way.

Later that night, after a couple of drinks at the hotel bar, I thought more about his comment. While I initially dismissed it as the proclamation of a person living in an alternate political reality (although haven’t we all had that feeling in the last few months), I quickly realized that the comparison couldn’t have been more apt.

Like the ERA, protections for transgender people rest upon the fundamental principle that people should have full and equal opportunities regardless of their gender or gender identity. In fact, courts across the country have held that statutory sex discrimination protections also protect transgender people, because anti-transgender bias fundamentally comes down to bias about a person’s sex or gender. But we know that only full and explicit statutory protections will keep transgender people safe from discrimination, and provide businesses the clarity they need to follow the law, as explained by the NH Business and Industry Association (BIA), the statewide chamber of commerce which came out strongly in support of the bill.

Like the ERA, almost all of our attempts to pass transgender nondiscrimination laws, including in NH, have been met with fear tactics around restrooms. Anti-feminist activists like Phyllis Schlafly argued that passing the ERA would result in the end of sex-segregated restrooms. In NH, as well as cities and states across the country, our opponents continue to propagate the myth that transgender nondiscrimination laws would make it easier for men to enter women’s restrooms, to sexually assault women and girls. That is despite the fact that in NH, we had the endorsement of the NH Chiefs of Police Association and the NH Coalition Against Domestic and Sexual Violence, who assured legislators that our bill would only strengthen public safety for all.

But most importantly, both ERA and transgender advocates have been working with courage and persistence for decades, against incredible odds. The ERA was first envisioned by suffragette Alice Paul in the 1920s, and made strong progress in state legislatures throughout the 1970s, before stalling 3 states short of ratification thanks to the targeted campaign of opponents like Schlafly. Transgender advocates, like Judge Phyllis Frye, have been working long before shows like Transparent and I am Cait brought transgender issues to prime time.

Even though the deadline for the ERA passed in 1982, there has been a resurgent focus on the ERA in the wake of the last election. Spurred by new and renewed feminist energy as powerfully demonstrated by the National Women’s March, Nevada is actually poised this month to be the first state in over three and a half decades, to ratify the ERA.

As the lead sponsor of Nevada’s ERA effort State Senator Pat Spearmen described: “I believe that in 25, 30, or even 53 years from now, I do think we will have the Equal Rights Amendment. I really do.”

And even though the ERA may not be currently enshrined in our Constitution, we see its theoretical underpinnings in so many other feminist legal milestones, such as Title IX, which among other things helped launch female athletic programs at colleges and universities across the country. And Title IX is now being used by a new generation of legal advocates to protect transgender students.

But equally important, the ERA gave life to the idea that there are no sufficient justifications for treating people differently due to their gender.

I think about the generations of ERA activists, from Alice Paul to Senator Spearman, when I struggle to find hope after defeat. I remember transgender fighters like Sylvia Rivera, and am inspired by transgender youth leaders today, like Sarah Huckman, a NH teenager who stayed at the State House until the very end, to see our fight through.

But the most important commonality that all of these generations of activists–and maybe even the man in the green sweater–share, is the ability to see not just the world in which we live, but the world we can create for the future.