Katie’s home during the day caring for one-year-old Dara. Late afternoon is the shift change – Aarav and Dhruva get home from school and Katie leaves for her 3:30-midnight shift as a hospice nurse. Aarav deals with dinner, homework, and bedtime.

They consider themselves lucky and are very aware of their blessings. But building their family has been complicated, and at times they’ve felt vulnerable. In 2010, when they decided to begin their families, using donor sperm, Aarav had not yet transitioned and they were not married.

So on the otherwise happy day when Katie gave birth to Dhruva, Katie was the only parent named on the birth certificate. Aarav had no legal relationship to their baby until three months later when their second parent adoption was completed. 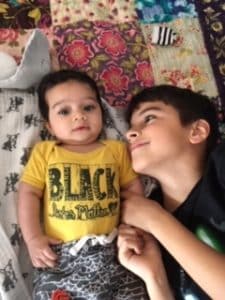 “Adopting our own child was strange and demoralizing,” says Katie. “We did our best with it, and tried to make it a celebration of our family. But it’s not something we’d want to go through again, or wish on anyone else.”

In subsequent years, Aarav transitioned, the couple got married, and decided to make Dhruva a big brother by adding to their family. They struggled with infertility for six years before Katie became pregnant through IVF. After a healthy pregnancy, Dara was born.

Because Katie and Aarav’s marriage brings with it a “presumption of parentage,” both Katie and Aarav are named on Dara’s birth certificate.  Dhruva is into Pokemon and Star Wars, and loves being a big brother. Dara “is friendly and silly and brings us a lot of joy,” says Katie.

But they still don’t feel entirely secure. Aarav was born in Ohio, which is a state that will not change birth certificates to accurately reflect a transgender person’s gender. “It makes us nervous about traveling as a family, or possibly moving to a state which would not fully recognize Aarav as a parent,” says Katie.

They could do another adoption to get a legal decree that would secure their parentage in all jurisdictions, but they do not want to go through that expensive and invasive process.  If the adoption process were more streamlined or if Rhode Island had clear protections for children born through assisted reproduction, their family would be secure.  For now, they 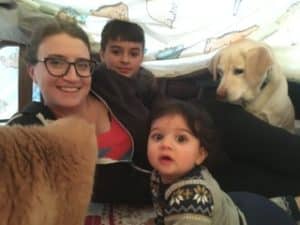 live in this middle ground of vulnerability.

“This can affect any couple who’s not married, or any couple who deals with infertility,” says Katie. “Rhode Island should update its laws so families like ours don’t have to deal with uncertainty and insecurity.”