Is This Really Still Happening? Why Banning So-called Conversion Therapy is a GLAD Priority 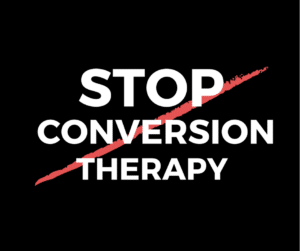 I was recently asked why GLAD is focusing efforts on conversion therapy bans. The question may have reflected the attitude I first had when considering whether and what kind of resources to put into this effort. My initial thoughts had been that conversion therapy is a thing of the past and the LGBTQ community is facing far worse problems these days. I no longer think that way.

It was not that long ago that GLAD received a call from a Connecticut gay, HIV positive man whose state social worker told him that he was living a sinful lifestyle. I was pretty shocked to get the call at the time but it confirmed for me how much hostility LGTBQ people still face about which we are not often hearing.

We are now in a political climate where conversion therapy is totally back on the table for discussion. Despite the fact that efforts to change a person’s sexual orientation or gender identity have been discredited as both ineffective and harmful, Vice-President Mike Pence has supported a position that “resources should be directed toward those institutions which provide assistance to those seeking to ‘change their sexual behavior.’”  This administration has already proven that they will follow through to take even the most offensive steps towards policies that they laid out during the campaign. All states need to be proactive to stave off the worst of what we may face.

The change of federal administration means that our kids, including our kids in New England, where GLAD focuses our state-level work, are growing up in a society in which the seriousness and legitimacy of their sexual orientation and gender identity is in question. And that reality has a predictable outcome – despair, self-harm, and sometimes, suicide.

Notwithstanding the non-discrimination laws that have been passed around the country, including in New England, the suicide rate for LGBTQ youth has held constant — remaining at 4 times the average of non-LGBTQ youth persistently. Why is that?  Among the reasons is that while much has been done to require non-discrimination, far less has been done to foster family acceptance, particularly among fundamentalist, religious communities. Simply doing an internet search turns up specific efforts waged by religious organizations in New England to reach families and offer conversion therapy services.

We know our youth face the risk of conversion therapy.

While a conversion therapy ban won’t stop families from sending children to pastors or religious camps that engage in these practices, it will prohibit public funds from being spent on such efforts, it will prohibit licensed mental health professionals from engaging in the practice, and it will provide critical information to youth and their families about the discredited nature of the practice.

I honestly think that if we do not think this is happening in our region, we are kidding ourselves. It was not that long ago that GLAD received a call from a Connecticut gay, HIV positive man whose state social worker told him that he was living a sinful lifestyle. I was pretty shocked to get the call at the time but it confirmed for me how much hostility LGTBQ people still face about which we are not often hearing.

GLAD is actively working with state and local partners in Connecticut, Massachusetts Rhode Island, and across New England  toward passage of conversion therapy ban bills this session (as Vermont did just last year). We will put the stories of youth and families front and center. We will make visible the stories of youth rejection and highlight the need for family education and family acceptance including and especially within religious families.

These campaigns also give us an opportunity to organize and rally the LGBTQ community’s activism, an opportunity that I am certain can and will be leveraged for other political and legislative fights (including ongoing efforts to pass transgender non-discrimination protections in New Hampshire and protect them in Massachusetts) – which we know are many and varied.

I hope you will step up and stand with us in these efforts.

Get more information on the Connecticut conversion therapy ban bill, HB 6695 An Act Concerning the Protection of Youth From Conversion Therapy, here.

Have you had an experience with conversion therapy in Connecticut? Share your story here.

Get more information about the Massachusetts conversion therapy ban bill, An Act Relative to Abusive Practices to Change Sexual Orientation and Gender Identity in Minors, here.

Get more information about the Rhode Island bill to ban conversion therapy, here.