GLBTQ Legal Advocates & Defenders (GLAD) has announced that its 2022 Spirit of Justice Award will go to Nadine Smith. GLAD will present the award to Smith at its 23rd Annual Spirit of Justice Award Dinner on October 27, 2022 at the Boston Park Plaza. Those outside Massachusetts or otherwise unable to attend in person will also be able watch a livestream of the program online. 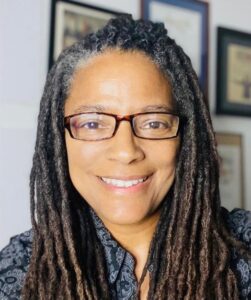 Honoree Nadine Smith is the co-founder and Executive Director of Florida’s statewide organization dedicated to ending discrimination based on sexual orientation and gender identity, Equality Florida. TIME magazine named Smith to the 2022 TIME100, its annual list of the 100 most influential people in the world.

A former award-winning journalist, Nadine has been a leading state and national human rights advocate, organizer, and LGBTQ equality champion for over three decades. She was on the founding board of the International Gay and Lesbian Youth Organization (IGLYO) and was one of four national co-chairs of the 1993 March on Washington. She currently serves on the U.S. Commission on Civil Rights Florida Advisory Committee.

Under Nadine’s leadership, Equality Florida has played a central role in every major LGBTQ rights issue in the state, from organizing against former adoption and marriage bans to advocating for nondiscrimination protections. As Florida has been in the national spotlight this year over dangerous anti-LGBTQ legislation, Nadine and Equality Florida have provided vital leadership once again. The organization ran a powerful advocacy campaign against the “Don’t Say Gay” school censorship and surveillance bill and are now challenging that law in federal court.

“For over three decades Nadine Smith has provided passionate advocacy and strategic leadership in the LGBTQ movement both in her home state and nationally,” said Janson Wu, GLAD Executive Director. “Florida has frequently been at the center of the struggle for LGBTQ equality, from fights over anti-discrimination laws and adoption bans, to the “Don’t Say Gay or Trans” law enacted this year. Nadine and Equality Florida are leading the fight against dangerous state laws aimed at erasing LGBTQ people and families in public schools. As we confront escalating anti-LGBTQ legislation and rhetoric and see our community increasingly targeted by those who want to restrict our freedoms, Nadine’s leadership at the eye of that storm in Florida truly epitomizes the Spirit of Justice. It’s an honor for GLAD to celebrate her inspirational life-long advocacy for human rights and LGBTQ equality with the 23rd annual Spirit of Justice Award.”

“At the most perilous times in history, our fight for full equality has always been buoyed by our commitment to locking arms and doing the work together,” said Nadine Smith. “It’s an honor to be recognized by GLAD this year and is a testament to the dedicated team of volunteers, colleagues, and supporters I have the privilege of working with at Equality Florida. Our state is again standing at the epicenter of a bigoted and extremist assault on LGBTQ people, fueled by a governor intent on building his political career on the backs of our community. But this fight is not simply Florida’s fight — it is a struggle to secure true equity, safeguard the progress we have made and protect our democracy from the onslaught. Our fight continues in earnest and it is a fight that needs all of us.”

GLAD’s 23rd Annual Spirit of Justice Award Dinner is co-chaired by Ray Cheng and Jamie Bergeron and will take place Thursday, October 27 at the Boston Park Plaza. The evening’s program will also be streamed from the venue for those who are unable to attend in person. The venue is mobility accessible and CART interpretation services are provided. GLAD is committed to celebrating safely and proof of COVID vaccination is required to attend in person. More details, including updated COVID protocols as well as tickets and sponsorships for both the in-person dinner and the virtual event are available at www.glad.org/soj.