On the eve of Trump’s disastrous 100th day in office, Facebook reminded me of a memory that feels like a lifetime ago, even though it’s been only two years.

It was a photograph from April 28, 2015 on the steps of the U. S. Supreme Court, as I waited in line to hear GLAD attorney Mary Bonauto argue for the freedom to marry for couples across our country. It was less than six months into my tenure as Executive Director of GLAD, and my face beamed with hope for what we could continue to achieve for the LGBTQ community going forward, if we only dream big. 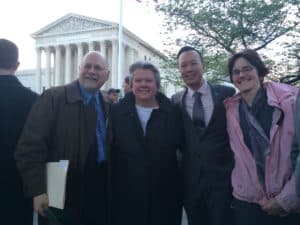 Fast forward two years, and at the end of Trump’s first 100 days, our community is facing unprecedented attacks.

This administration and its accomplices in Congress have

And what lies ahead after day 100 provides cold comfort and little trust:

It is a resistance that has embraced the intersections and the commonality in our social justice struggles, as well as the power in our diversity.

And those connections begin one-on-one. Just yesterday, the Executive Director John Robbins of the Boston chapter of the Council on American-Islamic Relations Massachusetts (CAIR) and I met to strategize around building a stronger relationship between our two organizations. We came together, because we both understood that we are one justice movement.

Two years ago, I was at the U.S. Supreme Court to hear not only LGBTQ civil rights champion Mary Bonauto argue for our community, but also Solicitor General Donald Verrilli. To have the weight of the executive branch, under President Obama’s leadership, behind our fight for equal protection under the Constitution is a milestone that cannot be overstated.

In his argument, Solicitor General Verrilli described how the 2003 victory in the Lawrence v. Texas Supreme Court case, striking down state anti-sodomy laws, was the catalyst for the nascent marriage equality movement.

When I am feeling hopeless, as I sometimes do, I draw strength thinking of the generations of lawyers and activists who were our movement’s catalysts, despite hostile forces all around them. Their resistance in the 70s, 80s, and 90s sparked a revolution that made it possible for me to stand two years ago – along with so many in our community – at the precipice of history making outside the U.S. Supreme Court.

And even as dark as the last 100 days have been, I derive hope from the millions of concerned people across the country who are awake and engaged for social justice.

Together, we will be the catalysts for the generation of powerful activists and advocates to come.

We want to hear from you: What are you most worried, distressed, and determined about at the end of these first 100 days? Let us know.