All children need the support and stability that comes from a legally secure parent-child relationship, however their family is formed. To meet this need, there is a simple and inexpensive route to establish legal connection to your child through a “Voluntary Acknowledgment of Parentage (VAP) form. These forms have been available for years but were not accessible to LGBTQ couples. In response to advocacy for updating policy in a growing number of states, more families can now use these forms regardless of gender or genetic connection.

While the rules for VAPs are established by individual state law, federal law provides that VAPs are the equivalent of a court order of parentage and carry the expectation that they will be respected across state lines and in all jurisdictions. VAPs are an important tool for protecting children by securing their legal parentage as soon after birth as possible.

What are VAPs and how are they regulated?

Federal law requires states to provide a simple civil process for acknowledging parentage immediately before or after the birth of a child.[1]  That simple civil process is the Voluntary Acknowledgment of Parentage, or VAP, program.  In the United States, a majority of children born to unmarried parents each year have their parentage established through a VAP.[2]

Federal regulations require states to provide a VAP program at hospitals and state birth record agencies.[3] At their discretion, states may also involve other health, welfare, or social services organizations.[4] The forms have to be made available at any entity participating in the state’s program;[5] some states also offer the forms through mail by request or online.[6]

VAP forms themselves are generally short affidavits in which the signatory—in most states this has historically meant an unmarried individual who believes that he is the genetic father of the child—affirms that he wishes to be established as a legal parent with the rights and responsibilities of parentage.[7] The person who gave birth to the child must also sign the form, and both parents have to provide some demographic information about themselves.[8] 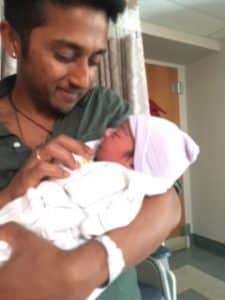 Federal regulations mandate, at signing, the presence of either a notary or witness,[9] although some states specifically require that the form be notarized.[10] Properly executed, a VAP has the binding force of a court order and is valid in all jurisdictions.[11] Federal law requires that a signatory be able to rescind the form for any reason within 60 days after its signing or prior to an administrative or judicial proceeding relating to the child in which the signatory is a party, whichever is earlier.[12] If the form is not rescinded within that 60-day time frame, a VAP can be challenged only on the basis of duress, material mistake of fact, or fraud.[13] VAPs can be filled out at any time before the child turns 18.[14] By signing a VAP, a person is established as a legal parent, and the child’s birth certificate is amended to reflect that legal parentage. In short, VAPs are an easy, inexpensive, and efficient way to establish legal parenthood by agreement and outside of court.

Where are VAPs accessible to LGBTQ parents?

Since a VAP is a critical access-to-justice tool that enables the swift establishment of legal parentage, there is new recognition of the need to ensure equal access to this path to parentage. The 2017 edition of the Uniform Parentage Act—an influential piece of model legislation for states—recommended the inclusion of intended parents and gender-neutral language in voluntary acknowledgment provisions to ensure equality for LGBTQ parents.[15] An increasing number of states have begun to expand access to VAPs to ensure that non-genetic parents and LGBTQ parents are able to utilize this important tool to establish legal parentage as soon after birth as possible.

In New England, Massachusetts,[16] Vermont,[17] and Rhode Island,[18] and Connecticut[19] allow LGBTQ parents to establish parentage through a VAP.

Outside of New England, Nevada,[20] California,[21] Washington,[22] and Maryland,[23] and New York have recently expanded access to VAPs through statute, and New York recently enacted a similar statute that will go into effect beginning February 15, 2021.[24] The following is a complete list of states, in order of expanded access, that currently allow LGBTQ parents to establish parentage through a VAP, with links to their forms:

VAPs are an important tool for protecting children by securing their legal parentage as soon after birth as possible.[28] GLAD will continue to work to ensure equal access to this path to parentage throughout New England.

[13] 42 U.S.C. §666 (a)(5)(D)(iii). The federal statute specifies only that the burden of proof will be upon the challenger and that any legal responsibilities stemming from the acknowledgment cannot be suspended during the proceedings without good cause shown; all other procedural specifications are left to the states. See id.  Some states, such as Vermont and Rhode Island, add additional bases for challenging a VAP.

[19] CT Public Act No. 21-15 AN ACT CONCERNING ADOPTION AND IMPLEMENTATION OF THE CONNECTICUT PARENTAGE ACT.

[27] For example, California requires that any donated gametes used not come from either the birth parent or the signing parent. Nevada and Maryland require that the signing parent be an intended parent (which can require additional paperwork), and New York will require both. See California Voluntary Declaration of Parentage form, supra note 26; Paternity Establishment, supra note 7; Birth/Death Records, Nevada Depart of Health and Human Services (May 28, 2020, 1:07 P.M.); NY PUB HEALTH §4135-b.  The states differ on whether parents through surrogacy can sign VAPs. Compare, e.g., California Voluntary Declaration of Parentage form, supra note 26 (stating that the form cannot be used with a surrogacy agreement), with Massachusetts Voluntary Acknowledgment of Parentage form, supra note 11 (allowing the form to be used without the signature of the birth mother if one parent has received a pre-birth court order establishing that they are the legal parent of the child delivered by gestational surrogate).

[28] VAPs, as noted above, are the equivalent of a court decree and therefore receive full faith and credit in all jurisdictions.  Until expanded VAPs are more widely established, GLAD recommends taking a “belt and suspenders” approach and also completing a co-parent adoption.  See V. L. v. E. L. 136 S. Ct. 1017, 1020-1021 (2016) (per curiam) (holding that states must give full faith and credit to final adoption judgments).