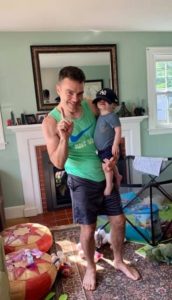 Since he was very young, Rolfe knew he wanted to be a dad. “Virtually every decision I’ve made in my life has been to enable me to be a good parent,” he says – for Rolfe that included becoming a lawyer so he could make a good living, and marrying Edward.

“Eddie had always thought kids wouldn’t be possible for him,” says Rolfe. “Then we met and talked a lot about it, and realized it was possible.”

They are now the happy, proud parents of Genie and Teddy, both 18 months old. Genie is a cuddler and a big eater. Teddy is inquisitive and adventurous. They both love the neighbor’s dog. Eddie has become a stay-at-home dad and Rolfe took a less intense, 9-5 job so he can have plenty of family time. 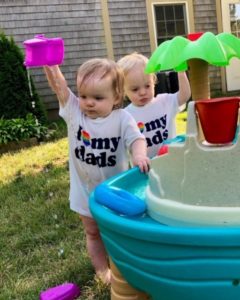 Rolfe and Eddie became parents through surrogacy. They sought the help of a reputable surrogacy agency, because “it was important to us that our surrogate be respected, well-treated, and not compromised in any way.” They were matched with a woman in Utah who carried their children conceived through egg donation. A year and a half ago, Rolfe and Eddie flew to Utah when she went into labor to be present for the birth of their children.

Why Utah? Because Utah is a state where both men could be recognized as legal parents at birth and have their names on the birth certificate, providing Genie and Teddy with the security of a legal relationship with both of their dads. “We just couldn’t take the chance that our family would ever not be together,” says Rolfe.

Rhode Island has no statutory guidance on or protections for surrogacy.  This causes considerable uncertainty for intended parents like Rolfe and Eddie, and uncertainty in parentage was too big a risk for them to take.

In Rhode Island, dads like Rolfe and Eddie would not both be designated as parents on the birth certificate. Instead, they would have to go through an adoption process, meaning their children would not be protected from the moment of their birth. Other couples who have gone through the adoption process have also found it intrusive and in some cases insulting. 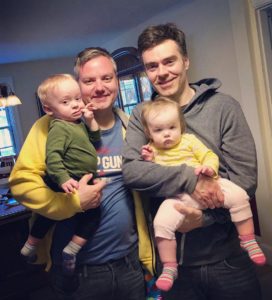 If Rolfe and Eddie decide to have more children, they would like to work with a surrogate in Rhode Island.  “It would be amazing, and better for everyone, if we all lived close together and could share the experience. We’d also like to have an ongoing relationship with her, and her with the kids.”

For all of these reasons, they support the passage of the Rhode Island Parentage Act. “All families deserve protection and respect,” says Rolfe.