What’s at stake in the current Supreme Court term?

It is hard to predict what lies ahead for the composition of the Court. The Court will clearly end this Term without a new, ninth Justice.

Even before Supreme Court Justice Antonin Scalia died on February 13, 2016, all eyes were on the Court for what promised to be a blockbuster Term. On the Court’s docket are major cases touching on redistricting, public employee unions, voting rights, immigration, abortion, and contraception coverage under Obamacare. 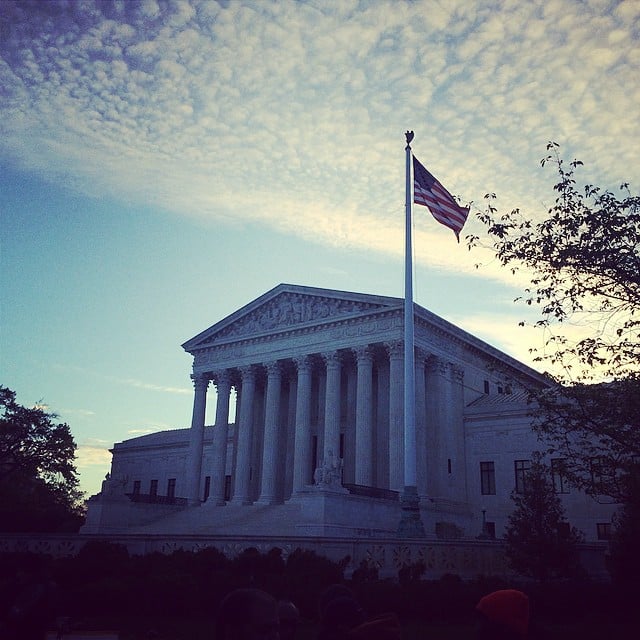 But with Justice Scalia’s death, the Court suddenly finds itself operating with only eight members, and possible tie votes on many of these cases.  A tie vote means that the lower court’s decision stands – but does not set a precedent. In some instances, this would be good news, and in others, of course, it would be bad.  For example, where the public employee unions had been anticipating a serious loss, the Court did split 4-4 on the case, meaning that a U.S. Court of Appeals decision favoring the unions – and their right to collect basic dues from all employees – will stand.  (In another example, the oral argument in the contraception coverage case suggested rather strongly a 4-4 split.  However, shortly after the argument, the Court issued an order asking the parties to submit briefs on the potential viability of an alternative way for the religious entities’ request for exemption to be handled.  It seems clear that the Court is looking for a solution that avoids a tie and provides a national solution to this controversy.)

One area of GLAD’s work has always been participating in amicus curiae (friend-of-the-court) briefs at the Supreme Court.  However, since our community’s victory at the Court in Obergefell – as well as GLAD’s involvement driving the amicus strategy in both Obergefell and the Windsor case striking down DOMA – GLAD and LGBT legal organizations have found ourselves sought after very particularly to weigh in cases as friends of the court. We are seen as having perspectives to offer based on our recent successes in changing the law right up through the Supreme Court.  Though none of the cases on the Court’s docket this Term are LGBTQ-specific, a number address issues of clear concern to us.

Here are four examples of cases where GLAD has been involved in various ways in the amicus effort:

Fisher v. Texas: This is the affirmative action case in which white law school applicant Abigail Fisher has challenged the formula used by the University of Texas at Austin to ensure a diverse student body. The case was first at the Court in 2013, when SCOTUS reversed a decision in favor of the University and sent the case back for reconsideration to the 5th Circuit. The 5th circuit once again affirmed the UT affirmative action program, and SCOTUS once again granted review. Arguments were heard in December 2015.  (This case is being heard by only seven Justices because Justice Kagan has recused herself.  Therefore, this case is not one in danger or a tie vote.)

The National Women’s Law Center approached GLAD and Lambda Legal about collaborating on its amicus brief about diversity as a way to break down stereotypes and enhance the functioning of educational institutions.  The brief examines, among other things, “intergroup contact theory” in which there are extensive studies involving LGBTQ people (building on early studies around race), showing that intergroup contact reduces prejudice.  The brief argues that racial and ethnic disparities can be diminished when stereotypes are confronted by reality – the daily contacts and differing perspectives offered by students of varying backgrounds – with a particular focus in the brief on women of color and LGBT people of color.

Whole Women’s Health v. Cole: In this very important case, the state of Texas imposed new, extensive, and onerous requirements on abortion providers. Our colleagues at the National Center for Lesbian Rights (NCLR) spearheaded a brief, which GLAD signed onto, arguing that when fundamental liberties are at stake, courts MUST carefully examine the justifications given by the state, especially those involving health and safety, and not take them at face value.  Texas says the courts must defer to the implicit or explicit judgments made by the legislature on these questions.

Our brief, which was signed by racial justice and health equity groups, as well at LGBTQ groups, details how people of color, women and LGBTQ people have suffered losses of liberty based on so-called scientific rationales.  We point to the pseudo-scientific notion the mixing of races resulted in “sickly and effeminate” boys; that there should be no women lawyers, no women bartenders, no pregnant teachers – because “science” showed women were unsuited to these roles; and that LGBTQ people have “psychopathic personalities,” which resulted in institutionalizations, teacher bans, deportations, etc.  The brief makes a very compelling argument, with these examples, that when courts are confronted with threats to liberties, the court is required to kick the tires of the proffered justifications.  And the brief ends by noting that courts have learned this lesson in recent years as in the willingness of the Supreme Court to debunk, for example, the various notions about the dangers of gay people as parents when the Court struck down DOMA and then extended the fundamental right to marry to all citizens.

(This case could possibly end in a 4-4 tie, which would keep the new Texas restrictions in place but would establish the law only in Texas, Louisiana and Mississippi.)

US v. TX: This immigration case involves both undocumented people with children who are U.S. citizens, and undocumented people who entered the United States as children. The Obama administration’s policies of DAPA (Deferred Action for the Parents of Americans) and expanded DACA (Deferred Action for Childhood Arrivals) would prevent the deportation of these categories of people, and the breaking up of families.  The implementation of DAPA and DACA, challenged by 26 states, was stopped by a federal district court in Texas, and that order was upheld by the Fifth Circuit. Late last year the federal government appealed the case to the Supreme Court.

Primarily as a matter of solidarity, GLAD joined a coalition of 326 immigration, civil rights, labor, and social service groups in an amicus brief which tells a lot of heartbreaking stories of people who are in this situation and who are making valuable contributions to the communities in which they live in the U.S.

(This is another potential 4-4 tie, but one with a devastating impact.  It would effectively mean that President Obama’s term will expire with no advancement on these policies’ important goals.)

VL v. EL: To end on a positive note, the Supreme Court issued a very important decision in this adoption case in March of this year.  This is the case in which a birth mother attempted to invalidate her ex-partner’s adoption of their children.  The women, Alabama residents, moved temporarily to Georgia so that they could do second-parent adoptions (not allowed in Alabama).  They were successful, and the family returned to live in Alabama – now with the children having two legal parents.  Subsequently, when the couple broke up and the birth mother sought to restrict contact between the children and their other mother, the non-birth mother sought relief in court based on the adoption.  The trial court and the intermediate appellate court agreed with her, but the Alabama Supreme Court (led by the infamous Roy Moore) was happy to oblige the birth mother and declare the Georgia adoption contrary to the law of Georgia and, as such, not subject to respect and enforcement in Alabama.

After this case was filed at the Supreme Court (called a petition for a writ of certiorari), counsel for the non-birth mother (NCLR and Jenner & Block) asked GLAD to submit an amicus brief in support of the petition.  (It is becoming more common to submit briefs like the amicus brief that we authored at the cert petition stage, urging the court to hear the case.  It can be a way to get the Court’s attention to your case when it is one of thousands reaching the Court and where the Court only hears 70-80 cases each Term.)

As it turns out, this case was “an easy one” for the Court.  It didn’t grant review; order briefing; and set the case for oral argument.  It simply summarily and unanimously reversed the Alabama Supreme Court, directing that court to follow well-established legal precedent that requires each state to give full faith and credit to the judgments issued by the courts of sister States.  (Justice Scalia’s death obviously made no difference in how this case was resolved although it perhaps would have been interesting to see if he would have broken the unanimity of the Court.)

It is hard to predict what lies ahead for the composition of the Court.  The Court will clearly end this Term without a new, ninth Justice.  Looking ahead to the next Term which convenes on the first Monday of October 2016, if the Senate Republicans continue with their vow that only the next President can nominate to fill Justice Scalia’s seat, we will likely have no ninth Justice for the next Term of the Court as well.

This is so because a nomination made in February of 2017 by the new President is unlikely to be confirmed even in a quasi-friendly Senate in less than three months.  By that point, the Court will have heard oral argument in all of its cases for the 2016-2017 Term.

The Court can deal with this by: (1) taking fewer cases until things sort out (something they show signs of doing already); (2) ordering reargument in cases where they are evenly split; (3) re-arranging the calendar of cases in order to put serious, disputed cases off as long as possible; and (4) working, as it seems in the contraceptive coverage case, to find compromises that avoid a tie.

As to the current nomination of Merrick Garland to replace Justice Scalia, if I had to predict I would think there will be no Senate hearings and no confirmation vote at least until after the November election and quite possibly not even then.  But predicting is probably a foolish venture where things in Washington are so volatile right now.