“We needed a way to tell our own stories – to reclaim the media,”

“Welcome to the Pink Village,” Moses greeted me as he unlocked the gates to the sunny, green yard of the one-story house that serves as the headquarters for Spectrum, a Ugandan organization serving the LGBTI community. Once inside, I saw Kasha, another prominent Ugandan LGBTI activist, sitting in the sun on the front steps with a beer in hand. 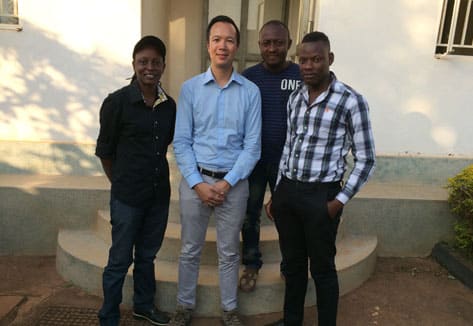 Outside Spectrum with Kasha, Moses, and Isaac

“So glad you found it!” she shouted. The Pink Village is the small neighborhood in Kampala where the Uganda LGBTI movement was born. Many LGBTI orgs and activists got their start in this area, finding security and support in numbers and proximity. Spectrum was one of those organizations, founded in 2004 by activists such as Moses and GLAD’s recent asylum client, John “Longjones” Wambere, to serve the health needs of the population of men who have sex with other men (MSM).

It was the tail end of my trip to spend time with my husband in neighboring Rwanda, where he works as a doctor part of the year. I had decided to stop in Kampala to meet Kasha, Moses, and other activists whom John had introduced to me, in order to learn more about their ongoing work both fighting anti-LGBTI legislation and growing public support for the community.

For by virtue of our humanity, we ought to love others like we love ourselves, and treat them with the same delicacy and sensitivity that we wish be accorded us.

While these activists may be feeling the strain of years of constant onslaughts on their rights and safety, they have also maintained their energy, and have recently launched new initiatives that will better the lives of their community.

One of those projects is a toll-free hotline for LGBT individuals, launched by Spectrum to improve communication, information sharing, and referrals. As Kasha and Moses described it, in a country where so many LGBTI people are closeted, it has always been a challenge to get information from the grassroots to the grasstops. Callers can get referrals to LGBTI-friendly health care providers, report abuses by the police, or just speak with a supportive listener.

One day, they hope to open a counseling and community center, with resources, referrals, and human services, such as suicide prevention counseling.

Another crucial component of building public acceptance is LGBTI people telling their own stories. Toward that end, Kasha had just launched her newest project, Bombastic magazine, with John’s help and contribution. Bombastic gives the community a media platform to counter the misinformation and distortions the general media purveys. As Kasha explained: “We needed a way to tell our own stories – to reclaim the media,” which up to now had mainly served to incite hatred and violence against the LGBTI community – including the 2010 Rolling Stone magazine cover calling for key activists to be hung, including Kasha and John.

And the community has responded, demonstrating people’s need to tell their own stories. After Kasha’s initial outreach, she received over 500 submissions. She quickly found herself with the welcome if difficult task of selecting and editing the entries for the online and print forms.

When Kasha handed me a copy, I was pleased to recognize a familiar face on the cover – John Wambere wearing a fun and feathered mask.

Before leaving, I asked Kasha how she and others are able to find the energy to launch new, affirmative projects when they are still defending against assaults such as the Anti-Homosexuality Act, which while recently overturned by Uganda’s Constitutional Court for technical reasons is still being threatened to be reintroduced. She said, “We are already in a backlash. There is nothing that we can do that will keep us from being scapegoated. We just need to keep the pressure on and keep going.”

We can do a lot to help activists like Kasha and Moses keep going, beginning with these guidelinesfrom the broad human rights coalition in Uganda dedicated to defeating the Anti-Homosexuality Act. We can also as provide financial support to Spectrum via PayPal to spectrumug@yahoo.com. And there is much that the U.S. LGBT movement can learn from the Ugandan movement as well.

GLAD is making its impact felt by helping activists like John stay here in the U.S. so he can continue his work. We are also providing feedback and advice to Spectrum regarding its hotline, a service that GLAD has provided to the U.S. community for over 35 years through our GLAD Answers legal information service.

One transgender woman whose story appears in Bombastic urges the Ugandan Parliament “not forget our ultimate calling and obligation. For by virtue of our humanity, we ought to love others like we love ourselves, and treat them with the same delicacy and sensitivity that we wish be accorded us.”

Regardless of who you are or where you live, those are good words we all should live by.