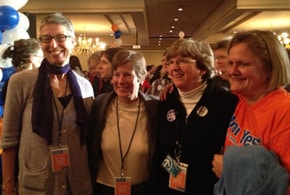 Mainers have said YES to marriage equality and soon all Mainers will be able to marry the person they love.

“Tonight we are thrilled, grateful, and humbled,” says Lee Swislow, GLAD’s Executive Director.  “We give our heartfelt congratulations and thanks to the people of Maine for listening with open hearts and minds, and embracing equality for gay and lesbian citizens. Mainers United for Marriage ran a superb campaign, and I can’t praise all of the campaign staff and volunteers enough.”

Mary L. Bonauto, GLAD’s Civil Rights Project Director and a Maine resident adds, “Winning marriage in Maine is profoundly important to those of us living here, including me and my family.  Now we can expect to see an outbreak of happiness, as couples – whether together for months or decades – can finally make that commitment to one another.  I am very proud of Mainers for sharing their concerns, hearing our stories and finding the common ground to vote yes.”

The road to marriage equality began 6 years ago with a coalition decision to proceed with public education efforts and marriage legislation. In 2009, Maine became the first state to pass marriage equality legislation and have it signed by a governor.  The victory was rescinded in November 2009 when voters approved a ballot question vetoing that law before it went into effect.  The coalition regrouped, ran a two-year public education campaign, and decided in January 2012 to proceed directly to ballot.

Mainers who have questions about when and how they can marry, can contact GLAD’s Legal InfoLine at 1-800-455-GLAD or www.glad.org/rights.