Unchanged Since the Seventies: Love Makes Families, But the Law Needs to Protect Them

Imagine being at the hospital as your child is born and worrying they might not be able to go home with you if something were to happen to your partner who had given birth. Imagine not being able to pick your child up from daycare, or take them to see a doctor. Imagine something happening to your partner and child services seeking to take custody because your child has no other legal parent. These are all real concerns that new parents have when they are not legally recognized—and new parents have enough on their plate as it is in the best of circumstances. 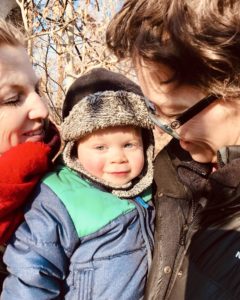 “I was not his birth parent and I wasn’t able to put my name on his birth certificate before we left the hospital. A birth certificate is the first and sometimes only legal link that a parent has with his/her child. It is a very, very big deal. My partner and I took the exact same steps as our “straight” infertile friends in conceiving, but we were denied the ability to put both of our names on the birth certificate just on the basis of our sex alone.”

Access to legal parentage shouldn’t depend on a family’s economic means, on whether the parents are of the same gender or different genders, or on how that family is formed. But our state laws haven’t kept up with the different ways that we form our families, including using assisted reproductive technology or having children before or without getting married. Even in New England, where we benefit from robust anti-discrimination laws, there remain significant gaps in parentage laws that force parents to undergo time-consuming, expensive and invasive processes in order to protect their relationship with their children. Many of these laws haven’t been updated since the 1970s.

Using the Uniform Parentage Act of 2017 (UPA) as model legislation, GLAD Senior Staff Attorney Patience Crozier has been collaborating with other advocates to advance parentage law reform in Rhode Island, Massachusetts, Connecticut and New Hampshire. The UPA and the state-specific bills modeled on it update the laws’ understanding of family to reflect present-day reality and to ensure accessible and nondiscriminatory paths to establishing parentage. This includes ensuring that LGBTQ families using assisted reproduction have access to parentage through the Voluntary Acknowledgement of Parentage process, which enables parents to secure their legal relationships to their children immediately at birth and without going to court. These reforms resonate with so many in the LGBTQ community and beyond who simply seek equal and fair means to secure their parent-child relationships.

The Rhode Island Parentage Act (RIPA) had substantial momentum and support in the 2019 legislative session. The bill passed unanimously in the Senate and had considerable support in the House where it was also poised to pass until the Chief Judge of the Family Court intervened unexpectedly. Despite having been consulted for his input prior to the bill’s filing, the Chief Judge engaged only at the last minute to request further study. The House created a study commission that will convene this fall to review the RIPA and move these critically important reforms forward. As a community, Rhode Island is galvanized to move this legislation forward and to ensure all children and families have equal access to parentage. GLAD will participate on the study commission, and remains committed to this legislative effort, and to sharing the stories of families who have experienced the difficult and painful impact of outdated parentage laws.

Parents Sara and Anna experienced the effects of Rhode Island’s outdated law firsthand when they started their family. Their son, Eli, was conceived using assisted reproduction. Because they were unmarried, Sara, as the non-birth parent, had no presumed legal parental connection to Eli at birth, and no route to establish her parentage.

“I was not his birth parent and I wasn’t able to put my name on his birth certificate before we left the hospital, which I know, sounds like a formality but it is not. A birth certificate is the first and sometimes only legal link that a parent has with his/her child. It is a very, very big deal. My partner and I took the exact same steps as our “straight” infertile friends in conceiving, but we were denied the ability to put both of our names on the birth certificate just on the basis of our sex alone.”

It took 8 months for Sara to adopt her own son – an excruciatingly long time to be in legal limbo, particularly when it comes to your child. What’s more, during all those months, Sara and Anna were subjected to the lengthy, invasive, and at times arbitrary steps of the adoption process, including putting an ad in the paper to notify the anonymous sperm donor of the pending adoption, in case he wanted to challenge the termination of his “parental rights.”

Rhode Island LGBTQ parents aren’t alone in seeking legislation to protect their families. Maine and Vermont both have passed comprehensive parentage reform, but the rest of New England has a ways to go.

Though Massachusetts now allows same-gender parents to sign a VAP, there are still barriers to establishing legal parentage within the Commonwealth. The MA Parentage Act is a sensible update to MA law that ensures all children and families have equal access to establishing parentage, and corrects discrimination that exists in the current state law. A public hearing on the MPA took place in early September.

In Connecticut, a coalition is working on draft legislation to update the state’s parentage laws, and we are hopeful that legislation will be filed in 2020. Similar efforts are also underway in New Hampshire, where statutes do exist to protect children born through ART and surrogacy, but where gaps in the law still still exist.

Love makes families, but we all agree the law needs to protect them. Continuing to operate with outdated, decades-old statutes leaves some children and families unprotected. GLAD is committed to ensuring that all children and families have access to the fundamental protection of legal parentage.