GLAD AIDS Law Project Director Ben Klein reflects on what it was like to receive the phone call that meant he would be arguing before the U.S. Supreme Court, in a case with life-changing implications for people living with HIV and AIDS

It was the Wednesday before Thanksgiving in November 1997, a quiet day at work. Gary Buseck, in his third week as GLAD’s new Executive Director, had decided to close the office at 3:00p.m.. Gary, other GLAD staff, and I were sitting in the conference room when the receptionist walked in and dropped this on me: “Ben, the clerk of the U.S. Supreme Court is on the phone for you.”

Now a 24-year GLAD veteran, I considered myself still new then at the three-year mark and a call like this is never an ordinary occurrence.

The Supreme Court grants cert and accepts and hears only about 80 cases each year. Only one other GLAD case – involving the right of an Irish-American LGBT group to march in Boston’s St. Patrick’s Day Parade – had gone all the way up to the Supreme Court. I thought my chances of arguing a case before the Court were about the same as my rounding the bases at Fenway Park.

I picked up the phone right there in the conference room, too nervous to take the time to get back to my office. I knew what I was going to hear. And I understood the consequences. I’ll admit I was shaking a bit. The clerk said, “Mr. Klein, I want to inform you that the Court has granted cert in the case Bragdon v. Abbott.” At that pre-Twitter, pre-cell phone moment, only counsel and the reporters at the Court knew.

In Bragdon, we represented Sidney Abbott, a Maine woman who had been refused treatment by Bangor, Maine dentist Dr. Randon Bragdon because she was living with HIV. We argued that the fairly new Americans with Disabilities Act (the ADA, passed in 1990) protected Sidney and all other people with HIV from discrimination and that dentists and doctors could not refuse to provide health care based on their fear of contracting HIV. GLAD pursued this case because we knew that the ADA could provide powerful protections for people living with HIV and AIDS, people who at the time faced harsh discrimination in nearly every realm of life.

We won the case in the federal trial court in Bangor, Maine. And we won again at the U.S. Court of Appeals. Most people thought that would be the end of the road – a solid precedent.

At that point, the Supreme Court had considered zero ADA cases and zero cases dealing with HIV or AIDS. Most observers thought there was no way the Court would hear this case. When I told my father that I was working on a case that might go to the Supreme Court, he expressed a strong sense of fatherly skepticism. But he wasn’t far off from what most people thought.

Now, it had happened. I called my co-counsel. I called my client. And then, because news wasn’t rocketing around the world via the internet, I knew I should call reporters. In those days of bare-bones staffing and tight cash, the lawyers at GLAD did all their own press work. We did a decent job, but we figured it out on the fly without the communications expertise we and other LGBTQ organizations now have on board. In my first few months at GLAD in 1994 I sued Delta Airlines for removing a passenger with AIDS from a flight. I called a press conference. I didn’t have any real idea what to do, so I just acted like the people I had seen on TV. It went just fine. 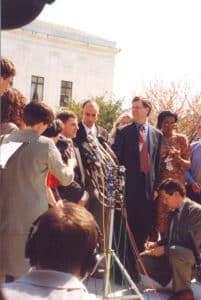 Luckily, a GLAD board member who worked in marketing had dug up in advance some direct phone numbers for Supreme Court reporters. So I dialed Linda Greenhouse, the New York Times reporter who the next year won a Pulitzer Prize for her Court coverage. Along with so many lawyers, I revered her for her insight into the Court and incomparable ability to explain legal concepts to the general public with precision. She picked up her own phone, was extremely friendly, and answered affirmatively when I said, “Hi. My name is Ben Klein and I have a case that the Supreme Court just took today. Would you like a quote from me?” You can still read her story here, and see for yourself what you think of the quote I gave her that day. 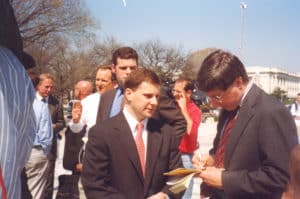 And then I called my father and told him I was indeed working on a case that was going to the Supreme Court and he could read all about it in the New York Times tomorrow.

Today, as I continue to work on new matters at GLAD that have the potential to change the law, I often think to myself: any case can settle, and any case can end up in the Supreme Court. You just don’t know.

I will always remember that phone call. It changed my life and, more importantly, it changed the legal landscape for people living with HIV. I took the long weekend off to rest up. After that, there wasn’t any rest for a long time.

Spoiler: We won – a critical victory for fighting HIV-related discrimination in jobs, housing and health care. But that’s another GLAD story.

Listen to Ben Klein talk about this pivotal case on our podcast: A Culture-Shifting Moment: Bragdon v. Abbott and HIV Discrimination