The Supreme Court and Healthcare for Transgender People

As an organization that has argued three landmark cases before the United States Supreme Court, we know the power of our Nation’s highest court to either harm or uplift the daily lives of LGBTQ+ people. For our client Alexander Pangborn, a recent Supreme Court ruling had a tremendous positive impact, as it should for transgender people across the country with employer-funded health benefit plans.

Alexander works as a hospice nurse in western Massachusetts. Like many transgender people, he needed essential medical care for gender transition.  Alexander receives his employee health benefits not through a traditional insurance plan, but instead through a plan that is self-funded by his employer. Unfortunately for Alexander, his employer’s health benefits plan had a complete, categorical exclusion of all gender-affirming medical care. “I put my all into my job and I paid into the same system as all my coworkers to receive medical care,” Alexander said at the time, “but my employer said that my healthcare isn’t necessary.”

Alexander’s employer thought that was legal. In fact, many employers, especially municipalities and larger companies, self-fund their employee health benefits plans and have operated under an assumption that such exclusions are legal.

GLAD sued Alexander’s employer in federal court. In Massachusetts, and in all New England states, traditional health insurance plans are prohibited from excluding gender-affirming care, often through guidance from State Insurance Commissioners who regulate insurance plans. Employer self-funded health benefits plans, however, are not covered by such regulations. Instead, legal challenges to exclusions in employer self-funded plans are brought under employment discrimination laws, for example, state laws that prohibit discrimination in the terms, including compensation, of employment. But here’s the catch employers have attempted to rely on when it comes to exclusions for transgender people’s healthcare needs, even in states like Massachusetts with state laws that explicitly prohibit discrimination on the basis of gender identity. There is a federal law that precludes the use of state laws challenging discrimination in employer self-funded benefit plans unless that state law is consistent with the analogous federal law – in this case, Title VII which prohibits discrimination in employment on the basis of sex.

We were locked in a legal battle for the long run. And then, in June 2020, the Supreme Court handed down its ruling in Bostock v. Clayton County, affirming exactly what we were arguing in Alexander’s case – that the sex discrimination provisions of Title VII do, in fact, prohibit 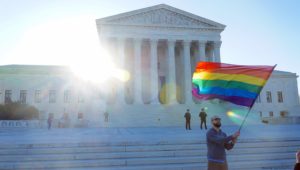 employment discrimination on the basis of sexual orientation and gender identity. The Supreme Court instantaneously removed any doubt about the consistency of Massachusetts and federal law with respect to discrimination against transgender people.

Within days of the Supreme Court’s ruling, Alexander’s employer reversed course, removed the exclusion of gender-affirming care, and folded its hand. While the case still has not fully resolved, we are pleased that Alexander and his coworkers are no longer being denied access to medically necessary gender-affirming care by their employer.

Amidst the joy of our community in finally having the Supreme Court affirm federal protections against employment discrimination, many people may not have focused on health insurance. The Bostock decision transformed the rights of transgender people, like Alexander, who have employer-sponsored plans. It has also elevated the profile of the continuing discrimination in this area.

To be sure there has been enormous progress in removing obstacles to health care for transgender people. But despite clear protections in law, significant problems remain in both employer-sponsored and traditional insurance plans. We continue to see and hear of plans with categorical exclusions of all treatment. Transgender people also still encounter categorical denials of specific types of treatment such as facial feminization surgery and other procedures insurers improperly categorize as cosmetic. We still see categorical exclusions of necessary chest reconstruction and other surgeries for minors.

GLAD remains focused on ending all of these exclusions so that the protections we continue to achieve under the law have a real impact on people’s lives. We recently resolved a case on behalf of a 16-year-old transgender young man who was denied necessary chest reconstruction surgery by his mother’s employer self-funded health benefits plan, and last year we successfully advocated at the Connecticut Commission on Human Rights and Opportunities for a ruling banning all categorical exclusions for facial feminization surgeries and related procedures. While we are thrilled with these victories and to have won the fight for Alexander, we are poised to continue the battle against the many plans that continue to discriminate. No one should ever be denied medically necessary care because of a discriminatory insurance exclusion.

Have you faced insurance exclusions in accessing gender-affirming care in New England? GLAD wants to hear from you: contact GLAD Answers. 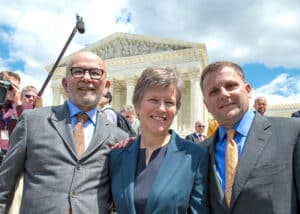 GLAD at the Supreme Court:

Alabama Court: Don’t Criminalize Us for Helping Our Kids