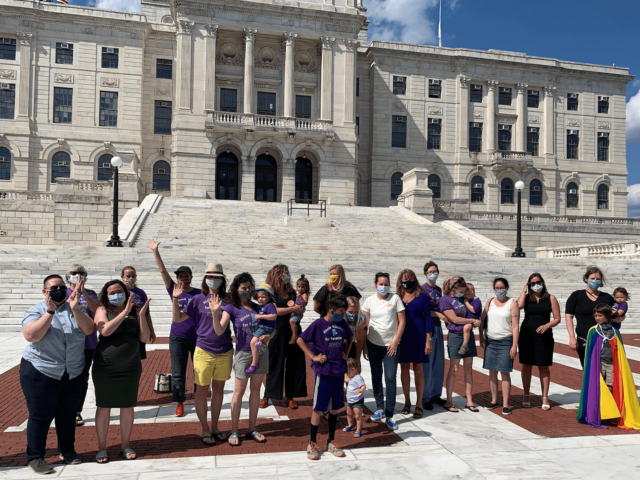 The latest victory for parentage equality in New England, won by and for LGBTQ parents.

We are celebrating a major victory for Rhode Island families this summer. GLAD has been working as part of Rhode Islanders for Parentage Equality (RIPE), a coalition made up of parents, families, community members, and organizations, to advocate for equal access to the legal security of parentage for all children and families, including LGBTQ families. Following a three-year-plus effort to update the state’s laws to be more fair, equitable, and protective of all families, the Rhode Island Uniform Parentage Act (RIUPA) was finally passed by both the Senate and House, and Governor Gina Raimondo signed the bill into law July 21. The RIUPA updates the state’s 40-year-old parentage laws to ensure all Rhode Island children have equal access to the security of legal parentage.

Polly Crozier, GLAD Senior Staff Attorney, describes how far reaching the new bill extends. “The RIUPA centers the needs of Rhode Island’s children and incorporates the perspective of the many stakeholders who care about Rhode Island children and families — including parents, community members, key state agencies, and the Family Court — as well as best practices from model national legislation,” explains Polly, who has provided leadership for updating parentage law in several New England states. “We’re grateful to lead sponsors Senator Erin Lynch Prata and Representative Carol McEntee for their commitment and work to make sure we passed a bill this session that makes Rhode Island parentage law clear, accessible, and Constitutional, and removes unfair barriers that have made it harder for parents to protect their children.”

The parents advocating for this bill showed up time and again at the Rhode Island State House and worked tirelessly to tell painful stories about the fears and consequences of not having a clear legal relationship to their children at birth. Then, the COVID-19 pandemic hit, which made their concerns even more urgent. After several publicized testimonies from parents and the vulnerabilities laid bare by the pandemic, the timing was finally right for policymakers to pass this critical legislation. “What’s best for Rhode Island and best for families is to ensure that all parents have the ability to protect their children through a secure legal relationship as soon after birth as possible,” says Wendy Becker, advocate and organizer with RIPE and LGBTQ Action RI.

“When my partner Anna and I welcomed our son Eli in 2016, I was a legal stranger to him because our laws didn’t address the parentage of a child born to unmarried same-gender parents or conceived through fertility treatments,” says Sara Watson, a physician and parent member of RIPE. “It took eight agonizing months to finalize Eli’s adoption. I couldn’t make legal decisions for Eli. I couldn’t add him to my insurance. I couldn’t pick him up from daycare. Rhode Island’s outdated law might even have denied me custody of Eli if something had happened to Anna before the adoption was finalized. For four years Anna and I have been advocating so families like ours never need to go through that same pain and fear.”

The bill passed just in time for RIPE advocates and expectant couple Andi Wheeler and their wife Meredith. “After four years of planning and painful losses, we are expecting our first child in the fall,” Andi explains. “But along with the joy of building our family, I have experienced profound fear about whether I will be fully recognized everywhere as my child’s parent.” Andi cites COVID-19 as an additional worry: the delays, whether the courts would be open, when they could begin the adoption process. “Our child, like every child born in Rhode Island, deserves to have a secure legal tie to both their parents as soon as they are born.”

For one RIPE Coalition family, the virus hit home in several ways — including both parents testing positive. “As an ER doctor, I’ve seen that families need security during a crisis,” says emergency medicine physician Elana Hayasaka in a recent Providence Journal op-ed. When Elana and her wife Denise both became ill, they worried about their health, their children, and the added uncertainty of their legal status as a family. “As the non-birth parent in a same-sex headed family, my legal connection to my children is not secure in every jurisdiction… COVID-19 highlights the vulnerabilities that families like mine face.” Elana and Denise’s family thankfully recovered, “but no Rhode Island parent should have the added burden of worrying whether they’ll be legally able to take care of their kids when a crisis hits.”

With this hard-won victory, Rhode Island will finally be able to streamline parentage for LGBTQ couples by updating processes such as the civil Voluntary Acknowledgment of Parentage. The VAP is a simple form that makes the burdensome, expensive, and lengthy co-parent adoption process unnecessary for parents who plan a pregnancy together. The RIUPA also creates for the first time in Rhode Island an accessible path to parentage for children born through assisted reproduction, as well as protections for children born through surrogacy.

The RIUPA was based on the Vermont Parentage Act and Uniform Parentage Act, and GLAD continues to work in several New England states to update parentage and fill the gaps in current protections so that all children have equal access to the security of legal parentage.

To view the full text of the reports and articles mentioned, visit our Summer 2020 issue of GLAD Briefs.

To learn more about the parents who worked tirelessly to get the RIUPA passed and to see the full list of organizations who supported this effort, visit this page.

Parents and families who have specific questions or concerns regarding parentage should contact GLAD Answers at www.gladanswers.org.