The Generations of a Name

At that time, he wasn’t even sure if the highest court in the Commonwealth would accept the brief, because of the words “gay” and “lesbian”.

When I became GLAD’s Executive Director last year, the organization had already had ongoing conversations about adopting a new, more inclusive name. While we wanted everyone we serve to be able to see themselves in our name, we also wanted to honor our proud history.

Gay & Lesbian Advocates & Defenders had been chosen by our visionary founder, John Ward, in 1978 for the purpose of proudly saying the words “gay” and “lesbian” in our name, at a time when very few other organizations did. It was imprinted in our DNA not only to change the laws, but to make our community visible, especially within the legal system where invisibility was the norm.

Eventually, GLBTQ Legal Advocates & Defenders emerged as the leading candidate – a name that would both honor our past and explicitly make visible that GLAD has always fought for bisexual, transgender, and queer people as well.

GLAD is now GLBTQ Legal Advocates & Defenders. Our name is new, but not our mission.

Check out this short video to learn more about how GLAD is moving equality forward #FORALL.

Even still, I like others had to adjust to the proposed new name, especially the inclusion of the “Q”. I grew up gay in rural upstate New York, and was bullied and called a “queer” in high school. The word still holds some of that meaning for me.

What helped me embrace it as part of our new name was the understanding that for so many bullied youth today who need our help, the letters LGBT do not reflect how they see themselves. But just as I needed help as a gay kid who was called “queer” as an insult, queer students today need that same support when they are told, “That’s so gay.”

Finally, before we were ready to move forward, I wanted to ensure that I honored GLAD’s past by reaching out to John Ward.

When I told John on the phone about what we were thinking, John was quiet. He said he wanted some time to think about it. When he emailed the next day, John began by describing the very first GLAD brief he filed with the Massachusetts Supreme Judicial Court in 1979, signed “John P. Ward, Gay & Lesbian Advocates & Defenders.” At that time, he wasn’t even sure if the highest court in the Commonwealth would accept the brief, because of the words “gay” and “lesbian”. Nevertheless, he said, “We took the plunge.”

John gave his blessing to the new name by the end of the email:

“In 1978, GLBTQ was as unimaginable as same-sex marriage. What was once radical can today be legitimately seen as exclusionary. It’s for you folks to decide what’s best, and I’m sure you will. My hope and belief, as we go forward, is that GLAD will stay on the cutting edge of social change.”

I reassured John that GLAD will always stay on the cutting edge of social change for everyone in our community, no matter what. And that even as new generations emerge to strengthen and grow our organization, movement, and community, one thing will never change: 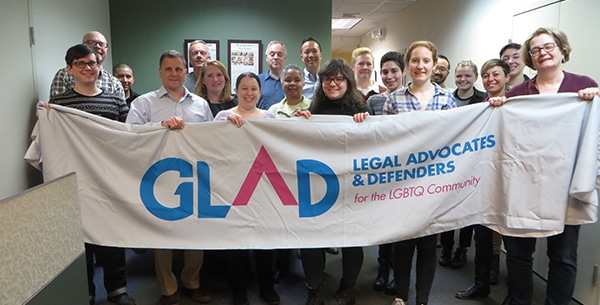 Inspired? Make a gift to support GLAD’s important work at this exciting moment!