Testimony in Support of Treatment for HIV-Related Lipodystrophy

The Massachusetts Joint Committee on Financial Services heard testimony Tuesday in support of a bill which would mandate insurance coverage for the treatment of lipodystrophy. 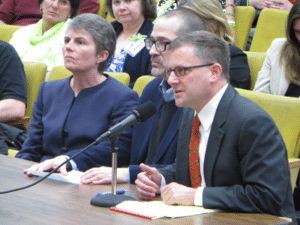 GLAD AIDS Law Project Director Ben Klein testifies in support of An Act Relative to HIV-Associated Lipodystrophy Treatment. Seated with him are Michael Achille, who shared his personal experience with lipodystrophy, and Camilla Graham, M.D.

“It will take so little to end this suffering and restore full functioning to the longest-term survivors of the HIV epidemic.”

Lipodystrophy is a serious and disfiguring side-effect of the powerful and life-saving HIV medications introduced in the late 1980s. It produces changes in the distribution of body fat, resulting in a range of conditions from “buffalo hump” on the back, to facial wasting. Despite the existence of simple and effective treatments, insurers do not cover those treatments, improperly labelling them “cosmetic.”

“I hope we can all agree that it should be intolerable in Massachusetts today to deny care to those who have survived AIDS, only to become suicidal or shut-ins, or who get called “freak,” or “monster” on the street, said Ben Klein, Director of GLAD’s AIDS Law Project, who testified in support of An Act Relative to HIV-Associated Lipodystrophy Treatment (H. 927 and S. 618). “It will take so little to end this suffering and restore full functioning to the longest-term survivors of the HIV epidemic.”

The legislation has a unique and built-in cost containment component. Lipodystrophy affects only a small, finite number of people with HIV who took the first wave of anti-retroviral medications in the 1990s. Data from the Department of Public Health indicate that between 184 and 459 people with HIV would seek treatment. The population needing treatment would decline over time. 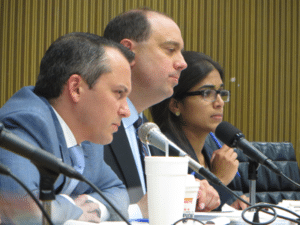 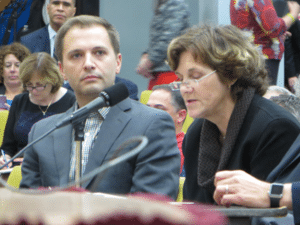 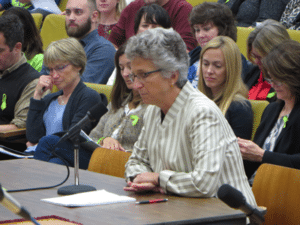