In a decisive victory reaffirming that states must treat all married couples equally, the U.S. Supreme Court today summarily reversed an Arkansas Supreme Court decision that had barred married same-sex couples from having both spouses’ names listed on their children’s birth certificates.

In its 2015 ruling in Obergefell v. Hodges, the Supreme Court affirmed the fundamental and equal right to marry for same-sex couples nationwide. The right to have both spouse’s names listed on a child’s birth certificate was one of the matters at issue in that case. 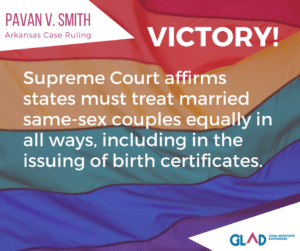 “In reversing the Arkansas ruling, the Court clearly reaffirmed Obergefell’s unambiguous requirement of equal dignity and equal treatment of all married couples. Today’s ruling reinforces that marriage equality is settled law, and that states must grant married same-sex couples equal access to all the rights, benefits and responsibilities of marriage.”

The plaintiffs in Pavan v. Smith are two married same-sex Arkansas couples represented by the National Center for Lesbian Rights.

GLAD was involved in the submission of two amicus briefs urging the court to review the Arkansas ruling: as counsel on a brief of family law professors, authored by GLAD, Foley Hoag, Joan Hollinger and Courtney G. Joslin of UC Davis School of Law; and as an amicus on a second brief filed jointly with Lambda Legal and authored by Gibson, Dunn & Crutcher.