Bryce Helie and Cara Millett met in college in 1999 and soon became inseparable.  After graduating, they moved to Rhode Island, where Bryce opened up a deli and Cara went to graduate school. “I knew I wanted to have children,” says Cara, but the couple wanted to make sure they did it in a careful, responsible way.  Long before same-sex couples could marry in Rhode Island, they researched both the legal and medical issues involved in having children. Bryce and Cara talked with friends who had had children through assisted reproductive technology (ART), and decided to go that route. 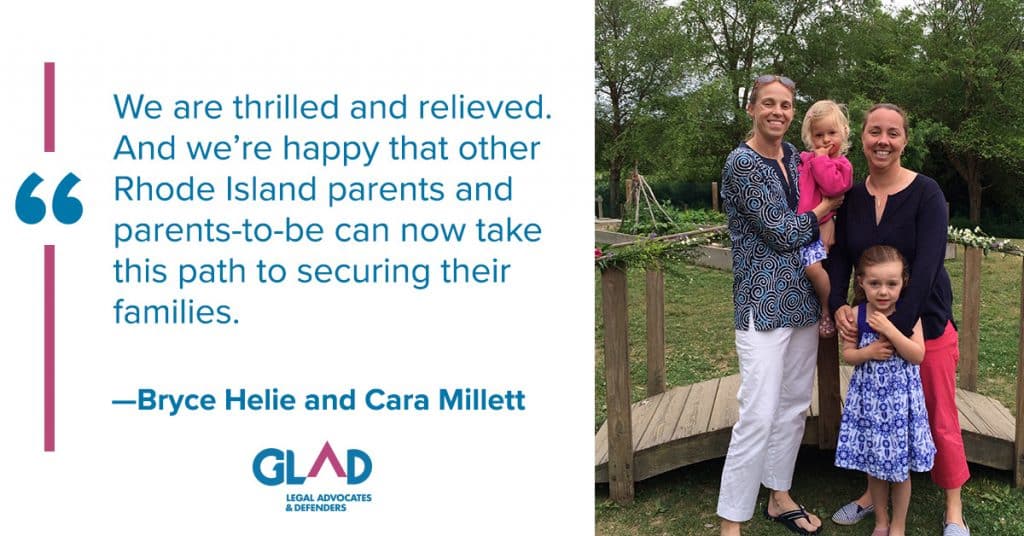 Their first daughter, Greyson, was born to Cara in August 2010.  Greyson was conceived through artificial insemination. The couple used sperm from an anonymous donor, obtained through a donation center in Fairfax, Virginia. “We were ecstatic when Greyson was born, and so happy to be a family,” says Bryce.  The couple established Bryce’s parentage through a second-parent adoption in Rhode Island.

When Cara and Bryce chose to have a second child, they made two important decisions: that this time Bryce would become pregnant and give birth; and that they would use the same anonymous donor as before, so that the two siblings would have that genetic tie. Bryce’s pregnancy was healthy, and in June 2013, she gave birth to their second daughter, Meyer.

This time, however, when they went to family court for a second-parent adoption, the court threw them a curveball. It required the couple to post a newspaper advertisement in Fairfax, Virginia, to alert the sperm donor about the adoption. “At first we couldn’t understand what he was asking,” says Cara. “After all of this time together, after getting married, after having two children, we still had to prove our family’s worth and validity. It made no sense to us.”

Cara and Bryce contacted GLAD, and Jennifer Levi represented them in court, along with Katherine Kohm and Michael Daly of Pierce Atwood. On October 26, 2016, Michael B. Forte, Chief Judge of the Rhode Island Family Court, issued a decision in the women’s favor – a decision that acknowledged Cara as Meyer’s parent, and eliminated the need for an adoption.

“We are thrilled and relieved,” says Bryce.  “And we’re happy that other Rhode Island parents and parents-to-be can now take this path to securing their families.”