A Retrospective on Forward-Thinking

To keep winning for the next ten years, we must sharpen the tools we have used for the last ten, and develop new ones to match our opponents’ new tactics.

I started at GLAD ten years ago as a staff attorney. I was only three years out of law school, and GLAD was a dream job. It was exciting to be working on cutting edge civil rights issues with movement leaders like Gary Buseck, Mary Bonauto, Jennifer Levi, and Ben Klein.

As I reflect on that decade of work, I am inspired by the progress we have made together.

Ten years ago, marriage equality was legal in only one state, Massachusetts, thanks to GLAD’s Goodridge victory. We were deep in the fight to keep the Goodridge victory from being put to a ballot vote, while also preparing our appeal to the Connecticut Supreme Court in our next marriage case, led by Ben. And even with all of that and more on GLAD’s plate, Gary and Mary informed me on my first day that I would be joining GLAD’s legal team preparing to overturn the Defense of Marriage Act (DOMA). My first assignment was to articulate a states’ rights argument against DOMA. 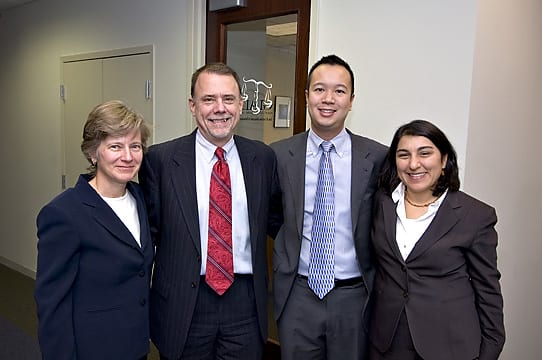 A decade later, and GLAD has helped to win marriage equality across New England and nationwide. We set the blueprint with early victories in the courts (MA in 2003, CT in 2008), state legislatures (VT & NH in 2008), and the ballot box (ME in 2012). We protected our victories against repeal and constitutional amendment, and we helped advance progress across the nation by providing expertise and support. We won the first federal appellate victory overturning DOMA, and coordinated the amicus strategy at the U.S. Supreme Court in Windsor v. United States, which ultimately brought down DOMA. And last year, Mary successfully argued for the freedom to marry at the U.S. Supreme Court in Obergefell v. Hodges. With each battle, we overcame fear and bigotry by bravely telling our stories to change hearts and minds, and deployed litigation and legislation strategically to advance the ball forward.

Today, even having reached this incredible milestone, we face an onslaught of legislation intended to whittle away the rights of married same-sex couples and the rights of LGBTQ people more broadly. Currently, there are over 65 bills across the country seeking to undermine or preempt LGBTQ anti-discrimination protects in the name of religion. Most recently, Mississippi passed one of the most sweeping such anti-LGBTQ laws in the country. It gives businesses with religious objections permission to deny wedding services to same-sex couples, and allows employers to use religion to justify workplace policies on dress code, grooming and bathroom and locker room access. LGBTQ individuals can even be denied housing for religious reasons.

These attacks are the same opposition that we have seen for a decade and more, dressed in different clothing. To keep winning for the next ten years, we must sharpen the tools we have used for the last ten, and develop new ones to match our opponents’ new tactics. That is why, for instance, GLAD is working on litigation in Pennsylvania that would protect transgender people across the country under the Americans with Disabilities Act, helping fill a critical gap left open by Congress’s inability to pass the Equality Act.

When I started at GLAD, I knew I wanted to work on transgender rights – an issue that I cared deeply about. And there was so much to do: for example, only two states in New England – Rhode Island and Maine – explicitly included gender identity and expression in their anti-discrimination laws. One of my early cases, with Jennifer, was on behalf of a transgender woman who was arrested and charged with disorderly conduct for using the women’s restroom at a public library in Rhode Island.

In 2014, we finally won the first, and still the only state Supreme Court case in the country to affirm the right of a transgender person – in this instance, Maine transgender middle school student Nicole Maines – to be treated consistent with their gender identity in all aspects of their life, including use of school restrooms. Not only that, we defeated a bill in the Maine state legislature that would have forced trans people to use the restroom that matches their assigned birth sex, similar to legislation that just passed in North Carolina. These early victories are critical to demonstrating that over time, non-discrimination policies only benefit, not harm, communities.

Today, the fight over restroom access for transgender people is in full gear. Not only in North Carolina, but in 13 states across the country, anti-trans legislation has been introduced. Even where we are able to defeat such bills, such as in Tennessee, the hateful climate that these attempts create puts the safety and wellbeing of transgender people at risk. It is critical that we have the resources needed to fight this extreme and dehumanizing attack on transgender lives. And it is also important that we continue to move the ball forward, even as we fend off attacks on our rear guard. That is why GLAD is working hard to make New England an equality zone, by passing comprehensive transgender anti-discrimination protections in Massachusetts and New Hampshire.

I am so proud of all GLAD has accomplished in the last ten years, and optimistic for all we can accomplish in the next ten. Our next decade of victories will be just as hard fought as past victories. But with our entire GLAD community in the game, I am confident that on my twentieth anniversary, I will get to describe an even more LGBTQ-inclusive and affirming world that we could never have imagined today.