Re-Think the World Around You

By creating and viewing objects in the same, generic manner as these objects have always been created and viewed, we limit ourselves. It is important to keep an open mind and re-think how things can be used or interpreted.

As we go about our daily routines, we encounter the same objects over and over again.  Usually, we do not give these things a second thought and only look at them through one perspective—typically the most well-known or superficial perspective.  But what if we changed our perspective? Could seeing literal things in a new way change the way we, and society, look at sexual orientation, gender, and gender expression?

We challenge you to think of the following objects in a way that alters their physical perception or the general meaning they hold for most people: a single-gender bathroom sign, a traffic light, and a human skeleton.

Did you come up with any new ideas?  See if they are similar to these new takes on these common-place objects. 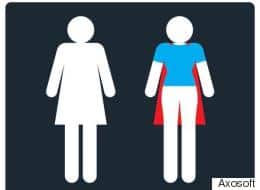 Above is a comparison of the traditional women’s bathroom sign figure and Axosoft’s re-imaging of this figure.

Did you know that the figure on female designated bathroom signs is wearing a cape, not a dress?  We sure didn’t!

Thanks to the tech company Axosoft, the creators of the image above, the meaning of this universal symbol now takes on a whole lot more than just ‘who uses this bathroom.’  It has expanded to include the concept of who a woman is and what she wears.  By re-thinking a sought-after but over-looked symbol, we find more affirmation that women are heroes who can rejoice in this role through multiple forms of expression, whether that be by wearing dresses or pants and a cape. 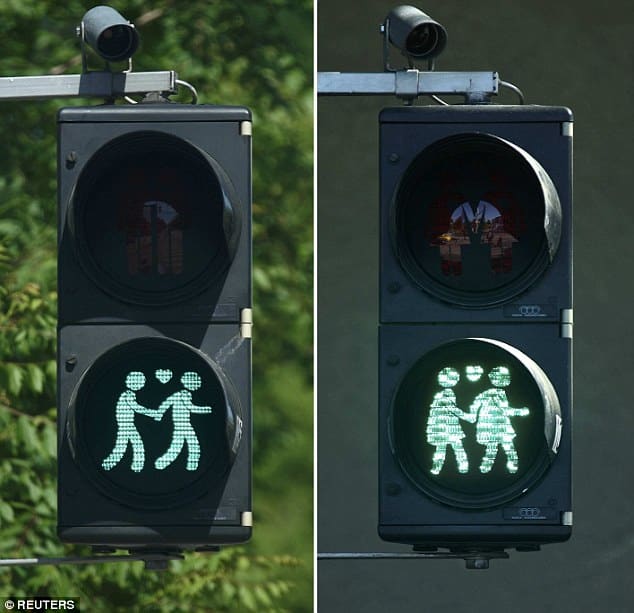 If you were in charge of a project to spread more support and awareness for the LGBTQ community, what mediums would you use to reach people?  Social media?  Bill board advertisements?  What about traffic lights?

In the city of Vienna, 47 traffic lights depicting same-sex and different-sex couples in lieu of the generic figures found on traffic lights were installed around the capital.  Originally meant to be a temporary project put in place for a group of tolerance-themed events hosted in Vienna, the city’s traffic official, Maria Vassilakou, decided to keep the traffic lights after declaring that the lights have reached “cult status.”  This declaration is a fascinating one since she is talking about traffic lights, after all.  It is incredible to imagine that an object as seemingly mundane as a traffic light can be transformed into a powerful message of acceptance and love. 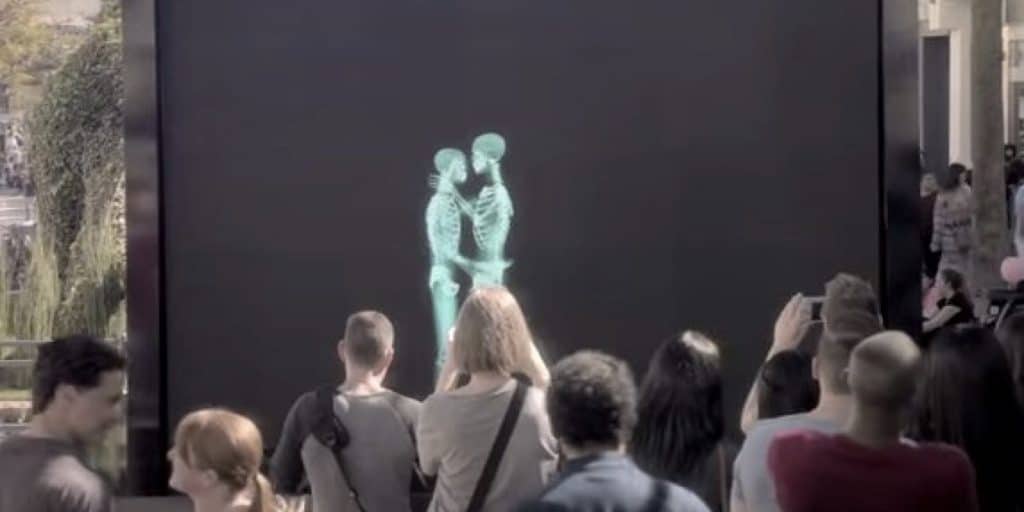 Above is a photo of an audience standing in front of the X-Ray, watching two ‘skeletons’ kiss.  The audience is waiting to see who will step out from behind the screen.  Click here to watch the video.

We all know the skeletal system and its functions from anatomy class.  However, in an effort to make people reevaluate their subconscious biases and prejudices, the Ad Council launched the ‘Love Has No Labels’ campaign, using skeletons as part of their method to gain more acceptance.  Couples, families, and friends of various backgrounds and ages (such as a gay couple with a child, an inter-racial couple, and friends of different religions) were filmed waving, kissing, and dancing behind a giant X-ray screen as an audience watched on.  The audience could only see the skeletons of the people until they emerged from behind the screen.  Some audience members were surprised by who emerged from behind the screen.  The use of skeletons in the film highlights that no matter who we are or what we look like, we all deserve love, acceptance, and happiness.

By creating and viewing objects in the same, generic manner as these objects have always been created and viewed, we limit ourselves.  It is important to keep an open mind and re-think how things can be used or interpreted.  By doing so, we not only exercise our creativity but find a new avenue to connect with others in order to understand a greater message of social equality, acceptance, and respect.  As more people are exposed to these new ideas and perspectives, the greater the chances become to see a change within society.  New ideas and perspectives can only be realized with the aid of action, such as the legal action that GLAD takes to make changes that improve the quality of living for many.  Yet, it must be remembered that every case GLAD has won started off as an idea that went against the grain.  Continue looking at things in a new light; a unique perspective has the potential to change the world.

For more posts such as this one, check out GLAD’s youth website.