When Pink and Blue Are Not Enough: An Experience at the True Colors Conference

Finding acceptance is an incredible thing when you feel like you don’t belong or fit in at school.

On Friday, I left the comfort and predictability of the Gay & Lesbian Advocates & Defenders office where I intern to attend the True Colors Annual Conference in Connecticut, an LGBT-centered event. This year’s theme was “When pink and blue are not enough.” 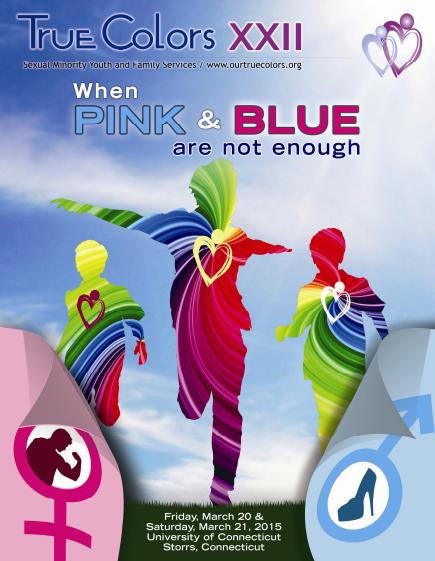 After the hour-and-a-half drive, we arrived at the University of Connecticut. The surrounding area looks like farmland. It’s rural, open and there are rolling hills everywhere. Then, when you get to UConn, there are massive buildings like you’ve never seen before. The lack of other buildings around them just made them seem all the more spectacular because it was just the campus in all of its glory.

We were welcomed to the campus with rainbow flags, a giant rock painted to say “The sky can be pink and blue, so why can’t you” and tons and tons of people. It was overwhelming.

I have never been to a Pride Festival, but I assume that this is kind of what it feels like. Everywhere I turned, I saw rainbows and hats and ears and tails and dyed hair and girls holding hands and boys holding hands, and there was a lot of energy and excitement around.

This conference was an incredible opportunity for them. Not only were they affirmed by the normalization of who they are — workshops, presentations, art, vendors and gender neutral bathrooms geared toward everyone in attendance — but they got to meet people from all over Connecticut who were like them too.

Numerous times, I saw people meeting new people and then running to introduce their new friend to their old friends. This was great and exciting because these kids had made friends so quickly and were so open and accepting.

Building a support network like that is invaluable to any high school student, but particularly for LGBTQ+ youth. Finding acceptance is an incredible thing when you feel like you don’t belong or fit in at school.

Also because the conference was held at a university, it opened the eyes to these high schoolers that college could be a place for them to end up. To some of these kids, college might not have been an option before. Now, they might see it as a safer space and a place where they can fit in.

After getting a little lost, we finally found the registration desk. My supervisor was going to give two presentations that day: one on knowing your rights in a police interaction and another about knowing your rights as a transgender person in public accommodations.

I attended a presentation given by AIDS Connecticut, called “The New Faces of HIV/AIDS.” It wasn’t quite what I was expecting, but it was still an informative presentation. The most interesting thing we discussed was which groups were most affected by HIV/AIDS in Connecticut. Most of them are intravenous drug users, but Connecticut also has a higher percentage of infected women and Latin@ population than the national average.

All of these people were interested in learning more about HIV/AIDS and take the newly acquired knowledge back to their communities. The ASL interpreters were going to use their knowledge to become better at their job, while the high schoolers were going to educate their peers on safer sex. Both are valuable and made for a meaningful workshop.

There was a photography exhibit called “Speaking OUT: Queer Youth in Focus” that depicted LGBT youth and their thoughts, which unfortunately had been vandalized with hate speech a few days prior. However, it was restored in time for us to see it.

The exhibit was very moving. The kids were ordinary, but they had incredibly insightful things to say, which were written on their portraits. Each revealed a little bit about who they are and their story. It was very personal.

Conferences like True Colors are important, even necessary, for communities. They are meaningful for LGBTQ youth to find a safe space and explore their identities. They educate other community members on LGBTQ issues. And they reinforce acceptance and support for the LGBTQ community as a whole, moving toward a world where pink and blue are not the only options