On the Nomination of Judge Neil Gorsuch to the U.S. Supreme Court

As you all know, the courts – as the independent third branch of government – play a pivotal role in protecting the rights of all citizens, particularly protecting unpopular minorities from what can be the “tyranny of the majority.” GLAD does much of our work in the courts, including the United States Supreme Court, where we have argued for marriage equality, the rights of people living with HIV, the rights of LGBTQ parents and, most basically, the right of LGBTQ people and people living with HIV to be treated with equal dignity.

As a result, we must also fight to protect and defend the integrity of the courts and help to ensure that they remain open to all on equal terms. Every litigant must receive a fair and impartial hearing, confident that the judges they appear before are committed to the rule of law, which includes upholding the Constitution’s guarantees of liberty, dignity and equal protection for everyone.

This is vitally important at the United States Supreme Court, the final interpreter of the meaning of federal laws and our federal Constitution.  And it is for this reason that we call on the Senate to very carefully vet Judge Neil Gorsuch, President Trump’s nominee to the Supreme Court, to determine if he is truly prepared to protect the vital guarantees of all.

Here at GLAD, we have serious concerns as to whether Judge Gorsuch meets that standard. In Druley v. Patton, 601 Fed. App’x 632 (10th Cir. 2015), Judge Gorsuch joined an opinion that dismissed the claims of a transgender prisoner, who asserted that her constitutional rights were violated when prison officials started and stopped her hormone therapy numerous times over 27 years and currently provided an inadequate dosage.

Relying on a 30-year-old decision, these judges – in 2015 – simply declined to recognize a right to hormone therapy for inmates with “GID.”  On her equal protection claims, about clothing and about being housed in an all-male facility, the court baldly declared that the prison had acted rationally and that “a transsexual plaintiff” is not part of a protected class entitled to heightened scrutiny by the court of state action.

We are also concerned about religious liberty and about how novel claims concerning the free exercise of religion can be asserted to inflict great harm on the LGBTQ community and women – something that is contrary to settled law that correctly respects citizens’ religious beliefs so long as they do no harm to others. 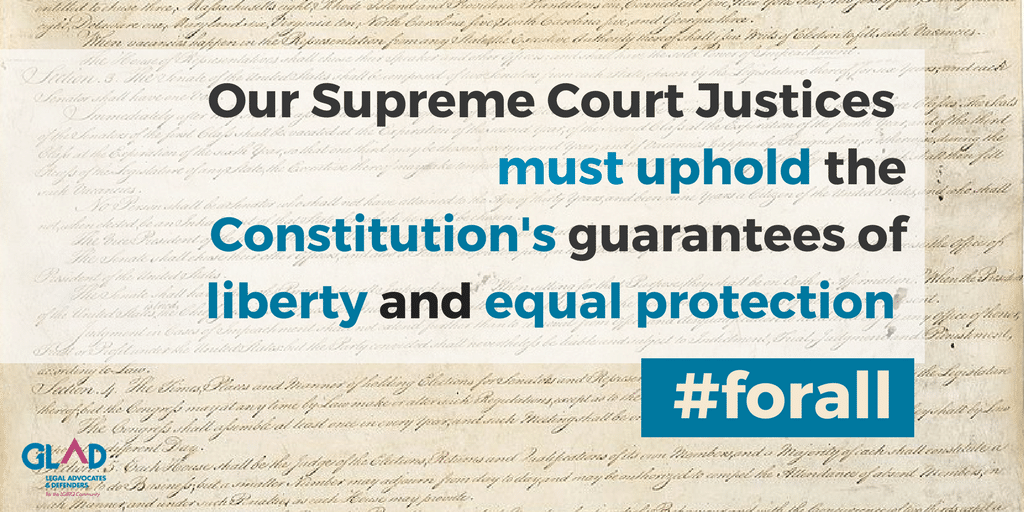 In the now famous (or infamous) Hobby Lobby case, the Supreme Court held that a closely-held corporation could actually assert a claim that its religious beliefs should exempt it from a portion of the Affordable Care Act’s requirements around contraceptive coverage.  Prior to the Supreme Court, that case had been in Judge Gorsuch’s court, which had ruled in favor of the corporation.  Hobby Lobby Stores, Inc. v. Sebelius, 723 F.3d 1114 (10th Cir. 2013).  There, Judge Gorsuch wrote a concurring opinion to argue essentially that a court cannot challenge a person’s faith belief that a particular act makes them complicit in conduct which they do not condone and, therefore, excuses their actions.  Imagine how this elastic concept of complicity (bear in mind that religious organizations have been claiming that it is complicit in sin for them even to submit a paper to the government indicating that they claim their right to an exemption from the ACA’s contraceptive coverage mandate) could impact the LGBTQ community, e.g., in the provision of any kind of service to an LGBTQ individual.

On a somewhat broader note, many important legal protections – such as the right to use contraceptives, to have an abortion, to engage in sexual intimacy and to legally marry the person you love – are ground in notions of privacy, autonomy and the dignity of the person that the Supreme Court has held are protected by the Constitution – under a doctrine called substantive due process.  Well, Judge Gorsuch has shown skepticism about this whole area of jurisprudence.  See Browder v. City of Albuquerque, 787 F.3d 1076, 1078 (10th Cir. 2015).  And, in this same area of the law, he has written extensively about assisted suicide and euthanasia, arguing that they can be prohibited as acts, “which, by definition, involve an intentional assault against the basic good of life,” which is sacrosanct.  Neil M. Gorsuch, The Right to Assisted Suicide and Euthanasia, 23 Harv. J. L. & Pub. Pol’y 599, 701 (1999-2000).

Finally, in 2005, before he became a judge, Mr. Gorsuch wrote an essay in which he criticized “liberals” as having an “overweening addiction to the courtroom,” seeking to gain and preserve rights in the court rather than from voters and elected officials.  His examples were marriage equality (this was not long after GLAD’s Goodridge decision in Massachusetts), assisted suicide and school vouchers. Where and from whom have we heard the siren cry of complaint before?

It creates worrisome questions about Judge Gorsuch’s willingness to do the important work of the courts in protecting people’s fundamental rights.

The Senate needs to dig deep into this judge’s record and writings to see if he can be trusted with this high office of utmost importance to us all.

Where there’s this much smoke, is there likely to be fire?