It feels like such a small ask, and yet an essential one, at this point to our governor.

Governor Baker left last night’s Boston Spirit Event when transgender activists, advocates, and allies vocalized their requests for his support of the transgender public accommodations bill. What did he expect?

We need and deserve more than an agreement “to talk to all parties involved.”  We ask for Governor Baker’s support for the bill. 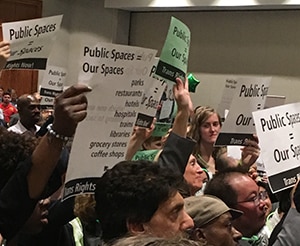 The community has waited over 10 years (since the introduction of a bill in 2004) for the most basic guarantees that we won’t be asked to leave or, worse, thrown out or arrested, just for accessing basic services readily accessible to most other people in the community.

It feels like such a small ask, and yet an essential one, at this point to our governor. Just say you won’t veto a bill that is now supported by hundreds of major Massachusetts businesses, the Attorney General, faith leaders, women’s groups, and Senateand House leadership along with the full-throated support of the LGBT community.

What could be so hard and why is it so important to be a remaining barrier when it is difficult anymore to even find the base of opposition to the bill?

Massachusetts has taken so many steps forward to support the transgender community – with the adoption of statewide protections for youth in schools and for out-of-home youth, passage of express housing, employment, school and lending protections, revision of policies to change gender markers on driver’s licenses and birth certificates, reversal of longstanding insurance exclusions. Why maintain this critical barrier – the omission of express protections on the basis of gender identity in our public accommodations law?

The community is frustrated and rightly so. We have answered every question about why the law is needed and how it can work in practice.

We need and deserve more than an agreement “to talk to all parties involved.” We ask for Governor Baker’s support for the bill.

Send a message to Gov. Charlie Baker to demand that he meet with transgender people and hear why they need #TransBillMA.