GLBTQ Legal Advocates & Defenders (GLAD) joined with partner organization, National Center for Lesbian Rights, and others today in filing an amicus brief with the United States Supreme Court in the case Gloucester County School Board v. G.G, soundly rebutting the School Board’s argument that its discriminatory action barring Gavin Grimm from using the boys’ restroom at his high school is justified by privacy concerns. 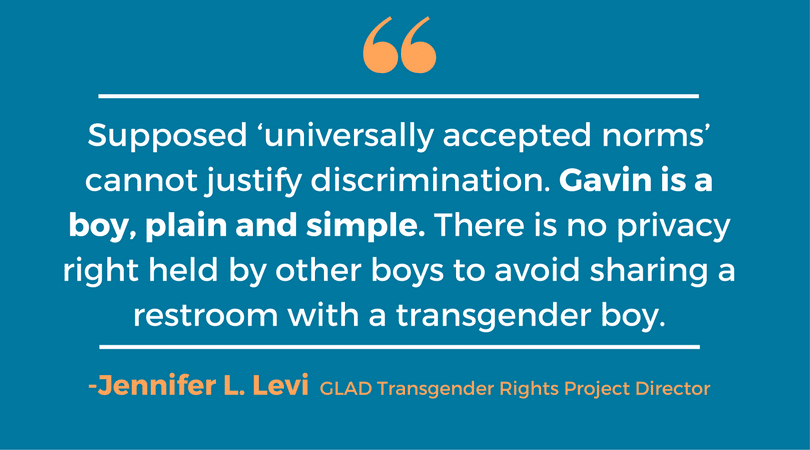 “Supposed ‘universally accepted norms’ cannot justify discrimination against an unpopular minority,” said Jennifer L. Levi, Transgender Rights Project Director at GLAD. “Gavin is a boy, plain and simple. There is no privacy right held by other boys to avoid sharing a restroom with a transgender boy.”

The brief argues that the School Board is attempting to defend its discriminatory treatment of Gavin by invoking unsubstantiated stereotypes and fears, and that it is precisely that kind of disparagement and indignity that Title IX is intended to prevent. It goes on to explain that the “wealth of experience showing that transgender people across the country use the same restrooms as others of the same gender… powerfully rebuts the School Board’s unsupported claim that permitting transgender persons to use public restrooms violates universally accepted social norms about privacy.”

“Social norms may describe behavior, but when they mask discrimination, we must look beyond them to see what is really going on,” added Levi. “In this case, the Board is relying on presumptions around social norms to justify its mistreatment of a student at school. Social norms no more justify the school’s conduct in this case than they do in cases involving discrimination against women, religious or racial minorities, or gay, lesbian, and bisexual people.”

“Further, if the School Board’s true interest is in enhancing the privacy of students, there are plenty of non-discriminatory methods to do so.”

Gavin Grimm is represented by the ACLU. The Court is set to hear oral argument in the case on March 28.