Getting to Yes (on 3)! My experience canvassing for a cause. 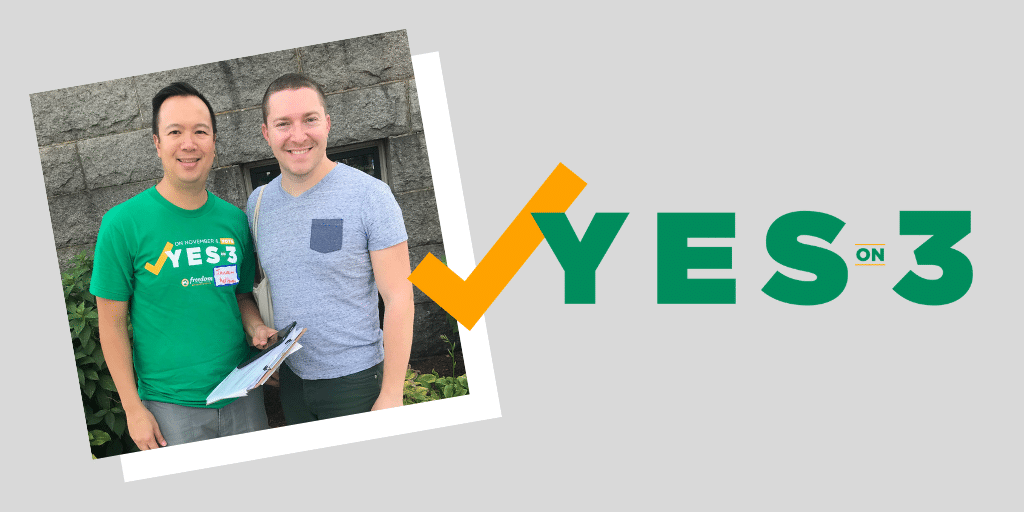 “Hi–I’m a volunteer for the Yes on 3 campaign, and I’m talking to voters today in Quincy about this important ballot question to uphold protections for transgender people in public spaces in Massachusetts, like restaurants and hospitals? If the election were today, would you vote yes to preserve those protections, or no to repeal them?”

I had already knocked on dozens of doors by this time, and so when an older, white woman with a friendly smile but a suspicious look on her face answered, I was ready with my introduction. We were targeting voters who generally support fairness, but become less supportive in the face of false, fear-mongering ads from our opponents that aim to make people afraid to share spaces with transgender people. Our job was to assess where they stood on Question 3 and address any concerns they had about supporting the law.

She said she didn’t think anyone should be discriminated against. I admit I was a little skeptical. Especially when it comes to LGBTQ rights, people often speak in broad generalities about how all people should be treated equally, or how they don’t hate anyone. But once you get into the specifics, many people aren’t so sure.

So, I showed her a negative ad from our opponents, depicting a young girl in a locker room, as a man emerges behind from a stall. As she watched, her face looked even more concerned and worried. When the ad finished, I was ready to address any concerns about what she just saw.

As it turns out, she did have concerns, just not what I expected. “I’m just worried that people will believe this garbage,” she said of the ad.

It was a beautiful fall day for canvassing with my friends JP and Colton. The first rule of canvassing, especially for an introvert like me, is to do it with friends. It’s more fun and less intimidating to meet and talk with strangers that way. The thought of canvassing made Colton quite nervous, for instance. But after a couple conversations, he turned out to have quite a knack for engaging voters–and clearly loved it.

If enough of us pitch in, collectively our small actions can bring us to victory, ensuring that the our transgender community family members and neighbors can continue to enjoy the same access to our public spaces that all other Massachusetts residents do.

Prior to our canvass we also received some top-notch training from Alice, a Yes On 3 volunteer who was clearly an experienced canvasser. We felt confident and well-prepared to have meaningful conversations with the voters of Quincy. And if you’ve been feeling anxious or helpless about our current political climate, taking concrete action to change it–no matter how small–is the best medicine. Overall, I knocked on 34 doors and had conversations with 12 people. A few things from our conversations struck me. First, and most concerning, not one person we spoke with was aware that a question asking voters to overturn or uphold our statewide law protecting transgender people from discrimination in public places would be on the ballot. So, as we head into the home stretch, it’s critical that we spread the word about Yes On 3.

Second, people were more open and willing to talk than I thought they’d be. Perhaps it was the warm, sunny weather but the people we encountered doing yard work or at their front doors seemed as engaged as we were in talking about Yes On 3 campaign. I honestly thought I’d have about two conversations with voters, so 12 felt like wild success.

The last thing that struck me was that I heard more support for Yes on 3 than I had expected. That shouldn’t have been so surprising, as we know that people generally support fairness. It is only when they hear our opposition’s misleading scare tactics about women’s safety in restrooms, does our support fall.

That’s why we must not let our guard down. Anything can happen between now and Election Day, especially as our opponents ads go up on air. The stakes are high. If voters overturn our trans-inclusive public accommodations law, it would mark the first time in our nation that trans protections were rolled back on a statewide ballot. That would set a terrible precedent and dramatically slow nationwide momentum for trans equality. It would also tarnish Massachusetts’s reputation as a national leader on LGBT rights.

We all have an unprecedented opportunity to be a part of history if we participate in the Yes On 3 campaign to protect trans rights in Massachusetts.

In the run-up to Election Day Nov. 6 there are many ways to take action: Host a phone bank or make calls. Canvass. Donate to the campaign. Share your story of why upholding these protections matters to you. Talk to your friends and family about the campaign. And of course, make sure you and everyone you know gets out to vote Yes on 3.

Even if you don’t live in Massachusetts, there’s an easy way you can take action by reaching out to everyone you know who does: a new tool—VoterCircle—makes it easier than ever to ensure the people you know in Massachusetts are voting Yes on 3 next week.

If enough of us pitch in, collectively our small actions can bring us to victory, ensuring that the our transgender community family members and neighbors can continue to enjoy the same access to our public spaces that all other Massachusetts residents do.

We must keep talking about Yes On 3. We must keep doing the hard work, because the more we do it, the easier it gets. Just ask Colton. I texted him a couple weeks ago to see if he wanted to hang out, but he had better things to do. “I’m canvassing again in Quincy!” he said.