From Sorrow to Resolve

Last Friday, the U.S. Supreme Court eviscerated a half-century-old precedent protecting the Constitutional rights of women and all people capable of pregnancy, to access safe abortions. In doing so, the majority decision, written by Justice Alito, diminished the equal rights and status of women and cast doubt on the continued vitality of core Constitutional liberties that we have long taken for granted – from the right to access contraception to the freedom to marry. Others, such as Justice Thomas in his concurrence, openly invited litigation to overturn these cherished Constitutional rights.

Justices Breyer, Kagan, and Sotomayor put it best, when they dissented “[w]ith sorrow—for this Court, but more, for the many millions of American women who have today lost a fundamental constitutional protection.” 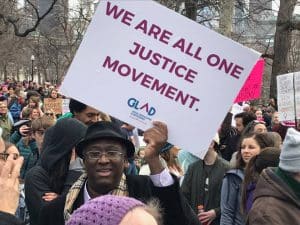 Today we are feeling tremendous sorrow. Sorrow for people who may suffer serious health complications – including death – from a lack of abortion care or medical care for miscarriages or ectopic pregnancies.

Sorrow for the people, including LGBTQ+ people, who will be forced to bear children and become parents against their will.

Sorrow for the members of our communities who are terrified right now about what’s next.

And finally, sorrow for our nation and our Constitution, whose promise of liberty is rapidly contracting with the Supreme Court’s radical departure from long-standing, judicial norms of respecting precedent.

Sorrow is disheartening and also necessary for healing. And we need to heal to be at our strongest for the fight ahead.

We have no choice but to be at our strongest and most resilient, because the fate of our nation rests upon our resolve never to give up.

Which path our nation goes down depends on what we do today, tomorrow, and the next weeks, months, and years ahead.

It will depend on how hard we fight, how deep we dig, how much we give.

It will be steered by how much love we offer to each other, how kind we are to strangers, how well we listen, and how loud we shout until we are heard.

We will not give up without a fight, no matter how hard it gets.

Generations of freedom fighters before us didn’t give their blood, sweat, tears, and at times, lives, for us to take the easy path.

Suffragettes didn’t fight over 70 years to pass the 19th amendment, and Black feminist leaders didn’t fight for another 40 years to extend the franchise to Black women, only for us to accept the Supreme Court’s relegation of women to second class status without a fight.

Generations of abortion providers didn’t risk their safety and at times lives to provide safe and affordable abortions to those who needed it both legally and illegally, for us to accept defeat silently.

And a new generation of activists are not continuing the fight to ratify the Equal Rights Amendment, 50 years after it was first passed in Congress, for us to deem the mountain too steep to climb.

Freedom is never given, it must be fought for, and often refought over and over.

That is what it takes – resolve. And that is what we have as a community and as a movement:

The resolve and the resilience to get back to work day after day, to be vigilant in protecting the rights we have, and ferocious in our drive to keep our Constitution’s promise of liberty alive and ever expanding.