MaineCare Has Removed the Outdated Exclusion for Gender Affirming Care 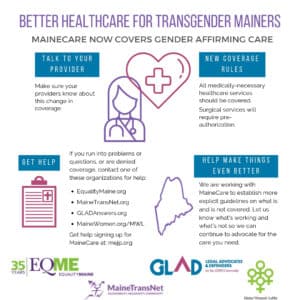 The historic announcement marks a significant change in MaineCare policy, removing an outdated and discriminatory exclusion of transition-related care from the regulations and adding vital standards of care that reflect current medical practices recognizing the healthcare needs of transgender individuals. These changes bring MaineCare policy into alignment with the professional medical community and into compliance with both state and federal law, including the Affordable Care Act.

The Maine Department of Health and Human Services (DHHS), following last year’s leadership changes and with input from LGBTQ advocacy organizations and community members, began to make necessary changes this spring to reflect medical standards regarding comprehensive healthcare coverage for transgender individuals. In June, DHHS adopted an emergency rule eliminating transgender procedures from the list of non-covered services. This policy change is now in compliance with LD 1, passed earlier this year by the legislature and signed into law by Governor Mills, which enshrined the language of Section 1557 of the Affordable Care Act (ACA) and its adjoining regulations into state law, and prohibits discrimination on the basis of race, color, national origin, sex, sexual orientation, gender identity, age, or disability in health plans in Maine. On September 16, the new DHHS rule took effect.

Under the new rule, medical providers will be reimbursed for providing MaineCare covered services to treat patients with gender dysphoria, a clinical diagnosis. Coverage for medically necessary surgical services related to gender dysphoria will require prior authorization. Gender dysphoria is a conflict between a person’s gender identity and the sex assigned to that person at birth. The American Psychiatric Association says it is often accompanied by extreme distress, which can interfere with the ability to function in everyday life. Criteria for determining medically necessary care will be based on consensus professional medical standards, such as the Standards of Care (SOC) of the World Professional Association for Transgender Health (WPATH).

“Trans people, like myself, need access to affordable healthcare to stay healthy and when we become ill or injured.  Some in our community may need additional care as part of our transition, but because trans health is so widely misunderstood it’s often a huge barrier to get the care we need to live a full, healthy, and productive life. Access to medically necessary healthcare is literally life-saving, especially for trans people, and it’s remarkable that thousands of Mainers will now have this coverage available to them” said EqualityMaine’s program director, Gia Drew.

“Trans people face significant economic barriers to accessing care, and more than 1 in 3 trans people have declined to access care of any kind because they could not afford it. Making MaineCare specifically trans inclusive is a vital step towards eliminating these barriers. Of the more than 1200 resource and referral requests MaineTransNet received in 2018, more than a quarter of them were about MaineCare coverage of transition care. This is an urgent need, and meeting it will save and improve lives,” says Quinn Gormley (She/hers), Executive Director, MaineTransNet

Maine proudly joins 22 other states, including the rest of New England, to explicitly cover transition and gender affirming care in our state medicaid program.

Mainers are eligible for insurance through MaineCare if their annual income is less than $17,232 for a single person or $29,436 for a family of three. For more information about getting MaineCare, connect with Consumers for Affordable Health Care or Maine Equal Justice. Mainers with incomes above the MaineCare threshold but less than $49,960 for a single person or than $85,320 for a family of three may be eligible for lower monthly premiums through the health insurance marketplace at HealthCare.gov; open enrollment runs from November 1, 2019 – December 15, 2019. For those already enrolled in MaineCare, these benefits should be available effective immediately, though billing codes and prior authorizations may be delayed.
###

MaineTransNet is Maine’s only organization specifically dedicated to supporting and empowering transgender people through community and health access and advocacy. With more than 30 peer based support groups from Kittery to Presque Isle, and more than a thousand support requests answered annually, MaineTransNet is the largest statewide transgender support organization in the United States.

Alabama Court: Don’t Criminalize Us for Helping Our Kids