To End AIDS, We Must Value The Lives Most At Risk

If we are to reach our goal of getting to zero, we must focus on counteracting the many ways our governments, institutions, and society devalue the lives of those who are most marginalized in society.

The scenes by now seem familiar. Activists blocking traffic at busy city intersections with locked arms, chanting “We’re fired up. We won’t take it anymore.” Protestors taking over streets and civic buildings, to raise awareness about the tragic loss of lives in their community and a government’s complicity in those deaths.

Only the year is 1988, not 2015, and the protesters are from ACT UP, a grassroots, leaderless, and national coalition of local, direct action organizations to stem the loss of lives to AIDS in communities across the United States. Their tactics of civil disobedience drew from past civil rights movements, and resonate today with the Black Lives Matter movement. Sadly, however, there is still a need for movements today that value the lives of those who are too often seen as disposable. 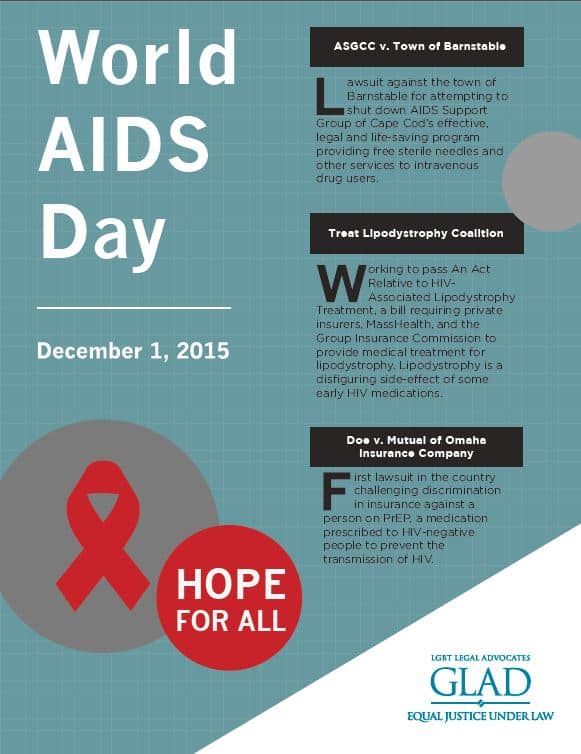 Today is World AIDS Day, and this year’s international theme again is “Getting to Zero” – meaning zero new infections, zero discrimination, and zero deaths. Thanks to life-saving medications and treatments, we have the tools to get to zero infections and zero deaths. But medicine alone cannot stop this epidemic, as long as HIV stigma and discrimination still exists. That is why GLAD is continuing its fight against HIV discrimination, in whatever form it appears, including against HIV-negative individuals who are choosing to protect themselves through pre-exposure prophylaxis drugs, or PrEP. When stigma and discrimination continue unchallenged, it keeps people from getting tested and receiving treatment – both critical steps in ending the epidemic.

However, we must go beyond ending stigma and discrimination. We must also value the lives of those who are most at risk of becoming infected – through our words, actions, and most importantly policies.

Over 40% of new HIV infections in our country occur among black people, making them eight times more likely than white people to become infected, with rates highest amongst young black men who have sex with men. And yet, black individuals are disproportionately denied access to health care due to the refusal of 20 states to expand Medicaid eligibility, as part of the Affordable Care Act. This is health care that could test, treat and prevent HIV infection – if only we valued enough the lives that are most hurt.

Overall, the highest percentage of newly identified HIV-positive test results is among transgender people. And yet, over half the states and the federal government have refused to pass explicit anti-discrimination protections for transgender people, including discrimination protections in health care. Far from valuing the lives of trans people, government officials go out of their way to demonize trans people as sexual predators. As a result, we are seeing an epidemic of violence against trans people, especially trans women of color, who are amongst the most vulnerable to new HIV infections.

Finally, we cannot place value only on the lives of people living in the U.S. There are almost 37 million people worldwide living with HIV, with 2 million new infections and over 1 million deaths each year – most of them black lives in sub-Saharan Africa. And yet, U.S. funding to fight the global AIDS epidemic has plateaued in the last 5 years, even though total global funding to fight HIV is still below what the global community has set as the amount needed to end the epidemic.

HIV disproportionately targets the most socially and economically vulnerable in our society. That is why, if we are to reach our goal of getting to zero, we must focus on counteracting the many ways our governments, institutions, and society devalue the lives of those who are most marginalized in society.

Gay men know what it was like to have their lives mean little to a government entrusted to protect their interests. To hear silence from government officials as their family members are dying. To have politicians call for special identification and quarantine of HIV-positive individuals. To be blocked from entering the U.S. based upon their HIV status. Sadly, the history of discrimination has a habit of repeating itself. That is why on this World AIDS Day, the time to act is now for the lives most at risk of being lost to the epidemic.