Be Brave: approaching a pivotal election on Nov. 6

We’re approaching a pivotal election on Nov. 6—one that will determine whether we continue down a path of fear and hatred, or turn back to building a country that is more fair, inclusive, and mindful of science, truth, and morality.

It’s been a politically chaotic and scary two years, especially for marginalized people, including the LGBTQ community.

In the midst of the chaos and fear, I’ve been thinking a lot about bravery. And I keep coming back to one quote.

It’s from a prominent journalist and later government official from the first half of the 20th century, Elmer Davis. Davis was committed to seeking and telling the truth. He took principled positions against Japanese internment, government censorship, and McCarthyism.

Davis said: “This nation will remain the land of the free, only so long as it is the home of the brave.”

Now, I would revise that slightly: This nation can only truly become the land of the free if we really commit to being the home of the brave.

Thankfully, right now, people who exemplify bravery are all around us. They’ve been working to build a more just world for us and for future generations through acts of courage large and small.

At GLAD’s recent Spirit of Justice Award dinner, I had the incredible fortune to celebrate some of these brave people: Sarah Huckman, a transgender New Hampshire teen and an inspiring young leader; GLAD founders Richard Burns and John Ward; and Jose Antonio Vargas, the Pulitzer Prize-winning journalist who has publicly chronicled his experiences coming out as both gay and undocumented. Their inspiring stories electrified the crowded ballroom at the dinner on Oct. 12.

I had the joy of watching Sarah advocate for herself and her community at the New Hampshire State House earlier this year, when she was active in the successful effort to pass a statewide trans non-discrimination bill. She testified before a legislative committee of Republicans, Libertarians, and Democrats, told her story to legislators and reporters, and listened to hours of hateful arguments from our opponents. Not once did I see her flinch. Sarah is not just one of the bravest youth I know. She is one of the bravest people I know. 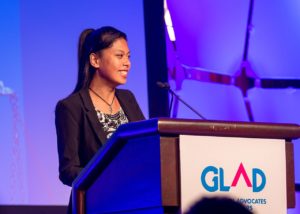 Back in 1978, the bravery of Richard and John might have appeared to some as lunacy. They fought against a wave of anti-gay hysteria sparked by right-wing celebrity Anita Bryant’s crusade to overturn gay rights ordinances around the country, and a massive sting operation by the Boston Police Department that targeted gay men for arrest and humiliation.

Richard and John set about realizing their vision of creating a more just world for LGBTQ people. Brazenly they named the organization “Gay and Lesbian Advocates and Defenders,” at a time when having those words in your name invited hostility and derision, especially in the legal community.

And I was thrilled to present the Spirit of Justice Award to Jose, who decided seven years ago that he could no longer live a lie, and wrote a moving, deeply personal essay about his life as an undocumented immigrant in America, at great risk to his career and his U.S. residency. 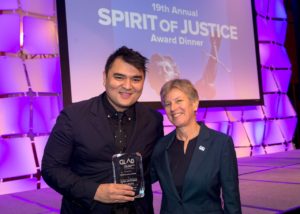 To borrow Jose’s words from his new book, “Dear America: Notes of an Undocumented Citizen” these brave individuals “refuse to live a life of fear, defined by a government that doesn’t even know why it fears what it fears.”

But you don’t have to take on an entire government to be brave – though we have plenty of reason and need to resist a federal government that is actively working to roll back civil rights.

And bravery isn’t the same as fearlessness.

No, bravery includes everyday acts to do right, despite that flicker of fear we feel in our chest.

Perhaps you’ve reached out to a relative since the last election to talk about an issue that’s important to you.

Or maybe you’ve done canvassing or phone banking for the first time for a political candidate in a swing district or as part of the Yes on 3 campaign to preserve trans rights in Massachusetts.

For me, I’ll admit, it’s every time I’m in a cab, and a driver asks me what I do for work, and I have to decide in the moment whether to come out as the head of an LGBTQ rights organization.

We’re all brave, every day. Every time we leave our comfort zone in the service of truth and justice. Yes, it can feel scary. But doing the right thing is always worth it.

In her remarks at Spirit of Justice, Sarah spoke of the fear she felt coming out as trans to her seventh grade classmates. She said she took courage in knowing she had the support of family, trans youth organizations, and GLAD’s legal advocacy. Her activism, she said, stems from her desire for “the LGBTQ kids coming up behind me to have an even better experience. No more kids being rejected by their families. No battles over restrooms, or what sports team to play on. The idea that I could impact somebody’s else’s life for the better gives me the strength and courage to speak up.”

That’s the beauty of activism. Generation after generation, we struggle so that others don’t have to struggle as much. I was born the year that GLAD was founded. Thanks to GLAD’s early, groundbreaking legal work, paved the way for a next generation of LGBTQ activists – myself included – to come of age and come out in the 1990s. My generation then built upon this foundation to make it easier for Sarah’s generation to live freely and be treated fairly, and whose shoulders will lift the next generation even higher.

As Jose has said, “All I know, is we are stronger when we’re together.”

Indeed, there is safety in numbers. The more of us who get involved in our electoral process, by donating and volunteering for causes and candidates dedicated to fairness and justice, by talking to our neighbors and loved ones about the people and issues we care about, and, above all, by voting and getting everyone around us to vote, the better life will be for us and for those who come after us. And the closer we will get to truly making this country the land of the free.

There is so much at stake, with this next election and beyond. And we will only succeed  in meeting the challenge of this moment, if we’re all just a little bit braver than usual. 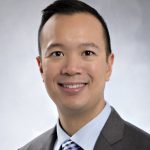