An Amazing Breakthrough on Anti-Discrimination Protections

For the first time, a federal court of appeals ruled that gay people are protected from employment discrimination under the federal Title VII law. 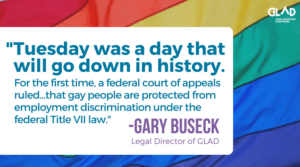 In the case, Kimberly Hively v. Ivy Tech Community College of Indiana, C.A. No. 15-1720 (April 4, 2017), Ms. Hively alleged that, as a part-time, adjunct professor, she was passed over for at least six full-time positions in a five-year period and that ultimately her contract was not renewed – because she is a lesbian. She filed a claim with the federal Equal Employment Opportunity Commission (EEOC) and then with the federal district court on her own. The federal trial court dismissed her claim – it really had no choice because higher courts had held that the federal law didn’t recognize sexual orientation employment discrimination claims. She appealed, and Lambda Legal came in to represent her before the Seventh Circuit.

Now things get interesting. A panel of three judges of the Seventh Circuit heard the case. Because earlier decisions from the Seventh Circuit had said sexual orientation claims could not be brought, the panel was forced to agree. However, two of the judges went on to state their views that the law had become hopelessly confused, trying to distinguish between gender nonconformity claims (that are covered by Title VII and can be brought by gay people) and sexual orientation claims (that are not). So, in overly simplistic terms, if a gay man sued because his boss called him a “girl” all the time, he had a claim; but if the boss called him a “fag,” he was out of luck. Go figure.

Well, the panel thought it was time to take a fresh look at this whole question; and that could only be done by a rehearing of the case before all the judges of the Seventh Circuit – 11 of them. Lambda Legal asked for that review – called en banc – and, with amicus brief support from GLAD, NCLR and others, the court agreed (which is rather rare).

The case was argued by Greg Nevins of Lambda Legal on November 30, 2016 and on April 4, 2017, the en banc court voted 8-3 to change the rule of the law in the circuit and held “that a person who alleges that she experienced employment discrimination on the basis of her sexual orientation has put forth a case of sex discrimination for Title VII purposes.”

And for 50+ years that view has prevailed. As the Hively court points out, it has been shared by the Seventh Circuit and by nine other of its sister circuits (leaving only two unaccounted for).

At the same time, the foundations of this “settled view” have been shaken recently. In 2015, the EEOC announced that it was taking the position that sex discrimination under Title VII includes sexual orientation discrimination. Some courts, like the three-judge panel in Hively, also began to question whether the law had reached a breaking point. And in the recent GLAD case against Walmart, the retailer chose to pursue settlement rather than fight the legal issue of sexual orientation coverage under Title VII.

In the end, Tuesday’s Hively decision seems quite simple – a matter of basic common sense. The court was persuaded by three straightforward arguments. First, if Kimberly Hively had been a man in an intimate relationship with a woman, there would have been no problem. However, as a woman, such a relationship created a problem for this school. “This describes paradigmatic sex discrimination,” according to the court. (Opinion, p. 11). Hively is disadvantaged because she is a woman – period.

Second, since 1989 and the famous Price Waterhouse case from the Supreme Court, it has been settled that gender stereotyping is a form of sex discrimination under Title VII. Looking at the case through that lens, “Hively represents the ultimate case of failure to conform to the female stereotype (at least as understood in a place such as modern America, which views heterosexuality as the norm and other forms of sexuality as exceptional): she is not heterosexual.” (Opinion, p. 12).

As mentioned above, courts had reached the point where they were slicing and dicing cases involving gay people very finely on the evidence of whether the basis for discrimination could be classified as gender stereotyping (“you’re such a girl” or “why can’t you wear a dress”) or as sexual orientation (“hey dyke” or “hey fag”). The court in Hively stated, “Our panel described the line between [these two claims] as gossamer-thin; we conclude that it does not exist at all.” (Opinion, p. 12).

Third, in the race context, if a person is discriminated against because of the race of the person she associates with, this is discrimination in violation of Title VII. So, if an employer fires a white person because she is married to an Asian man, she has been discriminated against because of her race. The Hively court said that this theory applies to all categories protected under Title VII, including sex. Therefore, “the essence of the claim” is that the plaintiff would not suffer discrimination if the sex of her intimate associates were different. (Opinion, pp. 18-19).

Eight of the judges (mostly Republican appointees) joined in this analysis. Three judges dissented, essentially taking the position of the Massachusetts court from nearly 40 years ago – that this is a matter for the legislature to decide and not a policy judgment for the courts to make.

With this dramatic break from the past, we can hope to see more such decisions in the future. Cases were just decided in federal courts of appeals in New York and Georgia where the plaintiffs lost – just like Hively because of prior, binding law – but where judges also wrote that it was time for their full, en banc courts to reconsider the question. The plaintiff in one of those cases has already filed for en banc review, and the plaintiff in the other case is planning to do so soon.

GLAD will be filing amicus briefs in support of both of those requests in the hope that both of those courts of appeals will agree to hear these cases and follow the lead of the Seventh Circuit – so that more gay people in more states will have federal nondiscrimination protections in employment.

And then we can envision a case at the United States Supreme Court in the not-too-distant future which will resolve this question for the entire country. Another reason – as if we needed one – to remind ourselves how important it is who gets to sit on the Supreme Court!