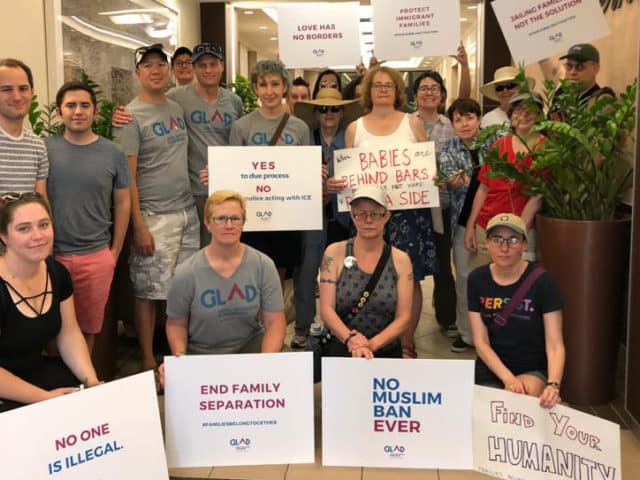 A Call to Action

July 4th has always been one of my favorite holidays.

I’ve always loved fireworks on the Esplanade, grilling in friends’ backyards, and Sousa marches – no surprise after many years of marching band.

But loving “Independence Day” has also meant reconciling two conflicting truths: one, that America was founded on the genocide of a continent’s native people, the enslavement of Africans for use as a labor force, and the subjugation of women; the other, that America’s trajectory toward our ideals of equality and justice led us to elect our first African-American president, despite having Hussein as a middle name.

It is because I have faith in our country to be better, that I do the work that I do.

And yet, these past weeks have shaken me. I have felt anger, and cynicism, and despair.

Two weeks ago, we saw the unfolding of a humanitarian catastrophe with the separation of refugee children – including toddlers and babies – from their parents. The response across the U.S. – horror, outrage, condemnation – was palpable.

It’s hard not to give into despair.

But then I remember: we are the majority in this country.

Those who believe that immigrants have always made America great, are the majority.

Those who understand that the free press protects all of us, are the majority.

Those who understand that our nation’s strength is rooted in our diversity, not division and exclusion – we are the majority.

The majority of Americans are fair, compassionate, and believe in equality.

So then, if we are the majority, how is it that supporters of fairness and democracy have lost power and influence within all three branches of our federal government?

A large part of the explanation is that our opponents have cheated. They have picked their own voters to ensure their reelection, through redistricting and voter disenfranchisement; they have willfully distorted perceptions of reality, appealing to fear rather than truth; they have stolen a Supreme Court seat to solidify their power.

It is infuriating. And while a part of me wants to fight fire with fire, to stoop to their level – we must be better. We must take the higher road.

The way we can win is by being even more disciplined than we already are.

First, we have to be more disciplined in our principles.

We are stronger when we are together, and we can’t afford to leave anyone behind, especially the most vulnerable communities. We are one justice movement. That is how we will fight, and that is how we will win.

Second, we have to be more disciplined in our focus.

Two weeks ago, we saw the unfolding of a humanitarian catastrophe with the separation of refugee children – including toddlers and babies – from their parents. The response across the U.S. – horror, outrage, condemnation – was palpable.

Perhaps for the first time, we saw a real chink in President Trump’s armor of amorality.

Then, in the midst of this moment, the conversation turned to what the First Lady was wearing.

To be clear, no person of any decency would have thought that jacket was acceptable.

But it also shifted the news coverage from the horrific videos of crying children ripped from their parent’s arms, which we know alarmed some soft Trump supporters.

We cannot afford to allow our nation to forget about those children for one second. They deserve that chance.

The marches and rallies that took place across the U.S. on June 30 are part of that sustained focus. And as the advocates who have been fighting unjust immigration practices for years can tell us, we have to keep showing up.

We must do everything we can to protect the fundamental right to vote for every one of us. That means working for the restoration of the Voting Rights Act, and to remove barriers to registration. It means pushing back against unconstitutional gerrymandering.

We must stay engaged in the electoral process at the local, state and federal level. We must communicate with our representatives. And we must get ourselves and our neighbors to the polls every single election day.

We have to be more disciplined in our tactics. In a word, we have to vote.

Finally, we have to be more disciplined in our social justice habits.

Just like a runner training for a marathon, we must build habits that incorporate social justice into our daily lives.

Join a community of social justice friends, such as Indivisible or the Movement for Black Lives. Make friends to go with you to rallies, knock on doors, or attend a fundraiser. Because evidence shows it is easier to form habits when you have a community of accountability and support.

Become a sustaining donor to an organization. Given Justice Kennedy’s impending retirement, I would recommend three organizations at the front lines of that battle –Alliance for Justice, the Leadership Conference on Civil and Human Rights, and the American Constitution Society.

We cannot afford to wait until it is too late. Now is the time to fight, with everything we’ve got.

Creating habits also requires rest. Take the sabbath off – whatever that means for you. Spend time with loved ones. Enjoy a favorite hobby. Take a walk.

When I need a break at work, I often take a walk to the Old South Meeting House, where the seeds of the American Revolution were planted. It was a site for protest, dissent, and resistance. At the time, those planting the seeds did not know for sure whether they would prevail. But they knew that authoritarianism was too great an evil to ignore.

Likewise, we must act now, not to forge a new nation, but rather to save one that we have fought so hard to make better. To preserve a union that generations of freedom fighters have given their lives to make fairer and more just. To free a society from the shackles of hatred, resentment, and distrust.

We cannot afford to wait until it is too late.

Now is the time to fight, with everything we’ve got.