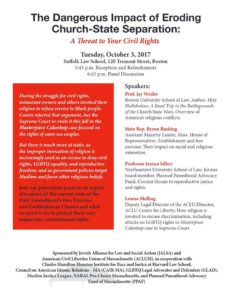 During the struggle for civil rights, restaurant owners and others invoked their religion to refuse service to Black people. Courts rejected that argument, but the Supreme Court re-visits it this fall in the Masterpiece Cakeshop case focused on the rights of same sex couples.

But there is much more at stake, as the improper invocation of religion is increasingly used as an excuse to deny civil rights, LGBTQ equality, and reproductive freedom, and as government policies target Muslims and favor other religious beliefs.

Join our prominent panel in an urgent discussion of the current state of the First Amendment’s Free Exercise and Establishment Clauses and what we need to do to protect these very important constitutional rights.

Louise Melling, Deputy Legal Director of the ACLU/Director, ACLU Center for Liberty; How religion is invoked to excuse discrimination, including attacks on LGBTQ rights in Masterpiece Cakeshop case in Supreme Court