“Humiliating, invasive, expensive, and discriminatory.” That’s how Denise describes a process she and her wife Elana, the parents of two young children, feel they can’t do – second parent adoption. Instead, the Pawtucket residents want Rhode Island to fully protect their family by modernizing its laws governing parentage to make room for families like theirs.

Elana, a doctor, and Denise, a social worker, have been together since 2001 and married in Massachusetts in 2011. They wanted children together and decided to build their family using donor sperm. Denise gave birth to their son Ian in 2012. The family moved to Rhode Island in 2013 to make it possible for Elana to attend medical school at Brown University.

Denise’s delivery of their second child, daughter Leah in 2018, was difficult. Because Leah’s heart rate faltered, the medical team opted for an emergency C-section. Leah went immediately to the neo-natal intensive care unit (NICU), and for a few hours Denise was incapacitated and unable to be part of medical decisions for Leah. “We didn’t come to the hospital with our marriage license, and Elana wasn’t yet on the birth certificate,” says Denise. The hospital, thankfully, understood that Elana as a spouse was Leah’s parent and honored her choices for her baby. 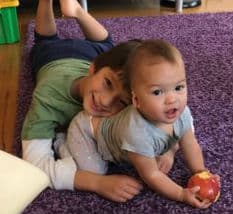 Leah, now a year old, emerged healthy after surgery and 23 days in the NICU. She recently started walking, dances to music, and has a few words including “something I think is ‘brother,’” says Denise. Ian, now six, “adores his little sister.” He also likes climbing and hanging upside down, dinosaurs, trains, and reading.

Although marriage confers on Elana the “presumption of parentage” and her name is on Leah’s birth certificate, Rhode Island family lawyers recommend a co-parent adoption for non-biological parents like her to ensure that her legal relationship is protected and recognized in all jurisdictions. That’s because Rhode Island’s family law is antiquated and has no way of legally recognizing many common contemporary family formations, like two parents of the same gender or parents who use assisted reproduction. To be fully protected under current laws, the family needs to do a co-parent adoption.

“We know there is risk here for Elana as a non-biological parent,” says Denise. The women worry when they travel to states that might not recognize  their equal status as parents. 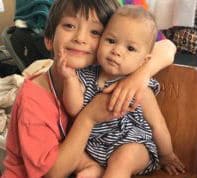 But they feel very strongly about not subjecting their family to the ordeal of adoption that they have seen many of their friends go through.  “It’s insulting,” says Denise, “to have to prove yourself to be fit parents to your own children.”

“It’s frustrating that most people aren’t even aware that this is something so many families have to deal with, even though families are formed in so many different ways,” says Denise. “For Rhode Island to change the law would not only make our family safer, it would be extremely affirming for us and for our kids.”