On January 31st, members of the transgender community and their allies delivered powerfully moving testimony in support of HB 1319 at a Judiciary Committee hearing. The show of support for HB 1319, the bill that would add gender identity protections to New Hampshire’s non-discrimination law, was so overwhelming, the Committee even scheduled a second hearing that took place on February 13th. A Committee vote on whether or not to recommend HB 1319 for passage is expected by the end of February. Read the testimony of GLAD Executive Director Janson Wu here. 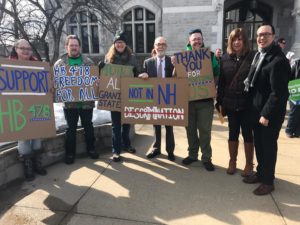 The bill has already received strong support from across the political spectrum, as well as from law enforcement, civic, faith and business leaders throughout the Granite State.

On February 21, 2017, a hearing was held before the Health, Human Services, and Elderly Affairs Committee, with 49 testifiers in support of the bill and only 7 opposed.

You can learn more and get involved at www.freedomnewhampshire.org