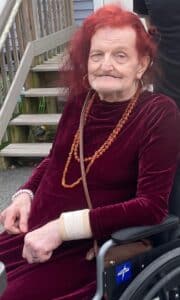 We all deserve to be treated with dignity and respect as we age. But transgender older adults, like our client Marie King, experience high rates of discrimination and vulnerability in long-term care facilities.

Update: On March 14, 2022, the Maine Human Rights Commission by a 3-2 vote found evidence that Sunrise Assisted Living violated state nondiscrimination protections when it denied Marie a room because she is a transgender woman. The milestone finding in Marie’s case is a huge step toward ensuring anyone who needs access to a long-term care facility is welcomed with courtesy and respect. Learn more.

On October 21, 2021, GLAD filed a discrimination claim with the Maine Human Rights Commission on behalf of Marie King, a 78-year-old woman who was denied a room by Sunrise Assisted Living in Jonesport, Maine because she is transgender. It is the first known discrimination complaint filed in the U.S. by a transgender older adult against a long-term care facility. Read the filing.

In the spring of 2021, the complainant Marie King was admitted to Pen Bay Medical Center for an acute medical emergency. Once Ms. King’s health was stabilized, the medical staff determined she did not require in-patient care and needed placement in an assisted living facility. A hospital social worker contacted Sunrise Assisted Living on Ms. King’s behalf and was told they had rooms available. Upon learning that Ms. King is transgender, however, the Administrator at Sunrise informed the hospital they would not admit Ms. King because they were concerned she wanted to reside in a room with a female roommate, despite the fact that Sunrise regularly places women in semi-private rooms with other women.

The claim brought by GLAD on Marie King’s behalf asserts that Sunrise discriminated against Ms. King based on her gender identity, transgender status, and her sex, all explicitly protected under the Maine Human Rights Act.