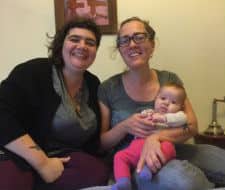 “After that, we wanted to be closer to family,” says Caroline. They moved from Arizona to Providence, where Simon was born. He’s a “super sweet and happy” three-year-old who “loves playing outside, pretending to be a wide variety of animals, and telling dramatic stories,” laughs Caroline.  She works full-time as an acupuncturist, while Ada works part time as a grief counselor. They juggle their work around Simon’s pre-school schedule.

For both pregnancies, the longtime couple used in-home insemination and the same known donor. Rhode Island has no laws protecting children born through assisted reproduction. So although they were married they decided to doubly secure Caroline’s relationship to Simon through a second-parent adoption. 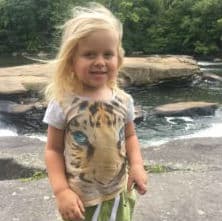 Adoption is a lengthy and burdensome process. The first obstacle is cost, as the adoption process in Rhode Island is too complicated for most people to navigate without a lawyer. Ada and Caroline talked to a few family attorneys who charged fees ranging from $2500 to $800. They had to borrow money from family to cover the fee. “We know we’re fortunate to have family support, and that not everyone has that.”

Then came more hurdles, each more uncomfortable than the last.  Caroline needed to prove herself a“fit” parent, submitting to a physical, soliciting three letters of recommendation, getting fingerprinted, and answering questions on everything from parenting style to religious beliefs.

And despite the fact that Ada and Caroline’s known donor had twice entered into a fully informed agreement with them, he had to be notified by the court. A deputy showed up unannounced at his house – where he lived with his own family – to “serve” him. Then when the women had their court date, a bailiff walked the hallway shouting out the donor’s name to “notify” him, of course outing him to everyone in the building. 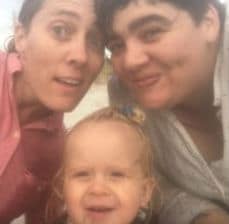 This period was stressful, at times demeaning. But Caroline and Ada were determined to provide complete legal protection for Simon, so they could care for him with no worries about interacting with doctors and schools, or about being able to make decisions in case of an emergency.

Simon’s adoption was finalized just before his first birthday. “There’s never been a question in our minds who our child’s parents are,” says Caroline. “But we had to prove ourselves to complete strangers. I wish these barriers were removed for us and for families like ours.”